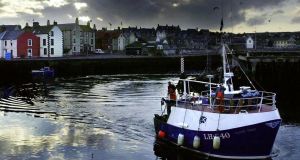 The British gGovernment is withdrawing the UK from an arrangement that allows foreign countries to fish in British waters. Photograph: PA

Britain’s withdrawal from an arrangement allowing other countries to fish in UK waters is unhelpful, the Government has said.

The UK will trigger its exit from the London Fisheries Convention, signed in 1964 before joining the EU, to start the two-year process to leave the agreement.

As a result, Irish trawlers will be banned from fishing within a 12-nautical mile zone.

The convention allows vessels from France, Belgium, Germany, Ireland and the Netherlands to fish within six and 12 nautical miles of the UK’s coastline.

Minister for the Marine Michael Creed said: “Today’s announcement by the UK government is unwelcome and unhelpful.

“It is a part of Brexit and will be considered by the EU 27 member states and the (Michel) Barnier team when the negotiations commence.”

The convention grants rights to neighbouring countries to fish in each other’s fishing zones based on historic fishing activity.

Mr Creed said Brexit posed “very serious challenges to the seafood sector and this announcement will form part of the negotiations”.

Speaking on RTÉ’s This Week programme on Sunday, he described Britain’s action as a “ratcheting-up of the temperature” around the negotiations but said it did form part of those overall talks, so in some respects was “not surprising”.

The Government was anxious to ensure that Irish access to the waters was “not constrained at all” but that the negotiations were at an early stage. We had not lost anything yet, but they would be “long and difficult” negotiations.

“What we have been doing is forging alliances with like-minded member states who will b e equally adversely affected, for example the French, the Spanish, the Germans, the Dutch, the Danes, the Belgians, the Swedes.”

The parties had been feeding into the Barnier process and were anxious that the Brexit talks would not take place on a “silo” basis, with fisheries one day and agriculture on another.

Mr Creed said the UK had a very strong hand in the context of the fisheries negotiations. But he and other states wanted to have the discussions in the broadest possible terms in order to get the best outcome.

He said that what was likely, in the event of an adverse outcome for Ireland, was the displacement from UK waters would mean more boats would fish in what were termed Irish waters.

“But they are EU waters outside the 12-mile zone.”

Sean O’Donoghue, chief executive of the Killybegs Fishermen’s Organisation, a large fish producers’ group based on Ireland’s west coast, said it is an aggressive measure by the British.

“We are not surprised; we did expect it,” he said. “The access for us is huge but the access between six and 12 is not our greatest priority, our access is between 12-mile limit and 200-mile UK-wide limit. “That is the important one.”

The EU Common Fisheries Policy allows all European countries access between 12 and 200 nautical miles of the UK and sets quotas for how much fish nations can catch.