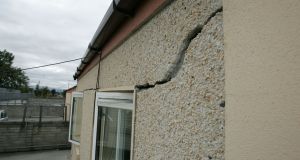 Cracking in a house at Avila Close, Finglas, caused by pyrite in the cement. Photograph: Frank Miller

More than 200 homes and several community facilities in 14 developments have been damaged by “pyritic heave”, where the presence of the mineral in foundations has caused subsidence and cracks in the buildings.

All of the housing was built on the north side of the city over the last 10 years. The council has already spent more than €10 million on repairs and expects to spend at least €1.9 million more to complete the work.

The next biggest bill is for the Carton estate in Ballymun where more than €3 million has been spent. The bulk of the money, €2,750,000, has been spent on repair works to the homes, with the remainder spent on sampling and testing, fees and the costs of temporary housing for the residents.

In Ballybough, the council has spent €970,000 fixing pyrite in 19 ground-floor apartments and almost €200,000 more on fees, tests and accommodation.

One of the first social housing estates where pyrite was found, Avila Park, a scheme of six houses built for Travellers in Finglas ,cost €750,000 to fix, with almost €100,000 more being spent on fees, tests and accommodation.

In total, the repair bill to date has cost almost €9 million, with the other costs, not including outstanding works, exceeding €1.3 million.

While almost €500,000 has been spent on accommodating residents in the private sector, many residents have also been housed in other council apartments and houses, which has lengthened waiting times for applicants on the social housing waiting list in these areas, Sinn Féin councillor for Ballymun Noeleen Reilly has said.

“Families have reached the top of the waiting list but can’t be accommodated because the house is being used for temporary accommodation for people who had to move out for the pyrite works.”

The timing of the works should have been planned better, Ms Reilly said.

“The council has known about the problems in Carton since 2011, but only started the work there towards the end of last year. This should have been planned better, instead we’re having to rehouse people in the middle of a housing crisis.”

The €12 million bill is separate to the €6.6 million interest-free loan given by council subsidiary Ballymun Regeneration Ltd to James Elliott Construction in the context of pyrite damage to about 100 houses that were built in Ballymun by the construction firm.