Another Life: New survey finds just 27 sites that fit the EU prescription for perennially vegetated shingle, almost all within special areas of conservation 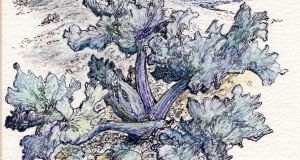 Seakale is reduced to ‘probably no more than 20 wild plants’ that ought to be left alone. Illustration: Michael Viney

Across the bay from us, in Connemara, the Renvyle peninsula stretches out to end in a rampart of rounded grey cobbles the size of big cannonballs. Walking out there decades ago I faced the ocean in some awe, for the beach of my childhood was the famously crunchy and clattery shingle of Brighton on the English Channel.

Lolling on its warm and moderately yielding slope, one could lick small pebbles into would-be “semi-precious” stones. Indeed, the pocketing of pretty pebbles grew so great that, in 2012, Brighton was asking Londoners to return their pebbles as a goodwill gesture.

The great storm beaches of Ireland, however, are in a class of their own. One can imagine the great ocean forces that seized on the rocks dropped from melting icebergs, cracked, rolled and sanded them into slabs and spheroids, then, over centuries, tossed them up above the reach of everyday waves.

The rawest “outsize” beaches are bereft of visible life: a geological jumble torn from Ireland’s mountain rim. Around the island, swept along in currents and longshore drift, cobbles and pebbles have built into high spits and banks, giving shelter to bays or defending the hem of the coast.

Over time, some have been stable enough to gather fine particles and seaweedy shreds, giving pioneer plant seeds the chance to settle and grow. Blooming and decaying, their annual remains have paved the way for further colonising species.

This ecological succession creates “Habitat 1220: Vegetated shingle” in the EU habitat directives. Globally rare and often threatened, the examples in Ireland are regularly monitored for signs of loss or degradation.

The first national survey, in 1999, found 153 possible candidates for Habitat 1220. One was at Carrowniskey, just north of us, a sweeping cobble bank heaping limestone on sandstone and granite on schist, with the odd black and polished egg of dolerite, or pillow of conglomerate welding pebbles of pink and green.

The strand’s autumn breakers are a favourite of surfers and the stony ridge has been a grandstand for horse racing in July. But recent great winter storms ploughed into it, sweeping cobbles far over the shore. The stones build again, given time, but their stability remains somewhat mobile.

North again, Mayo’s Belmullet Peninsula was judged in the survey as “notable for its ephemeral shingle ridges”, five metres high in some places, but disappearing for months at a time. Such ridges give sparse and short-lived foothold to plants of any kind.

A new survey for the National Parks and Wildlife Service (NPWS) found just 27 sites that fit the EU prescription for perennially vegetated shingle, almost all within special areas of conservation (SACs).

The largest covers more than eight hectares of beaches on a spit at Derrymore Island, Co Kerry, a privately-owned nature reserve in the shelter of Tralee Bay. Three others of some size are at Tawin Point in Co Galway, The Murrough in Co Wicklow and in Dundalk Bay, Co Louth.

Derrymore Island was the only one of these in “favourable” conservation condition, the other sites – indeed, all but five – range from “unfavourable” to “inadequate”, sometimes both.

Nature is the first cause of coastal change, and bigger storms and rising sea level will have fresh impacts. A frequent reason for a bad report was the way nearby man-made coastal defences had starved the supply of new shingle.

But illegal gravel extraction, recreational pressure, grazing livestock, and invasion by non-native plants such as ryegrass – even a misplaced car-park – all counted against the security of pioneer plant succession (pdf of Irish Wildlife Manual No 98 at npws.ie). Are they really worth such ecological concern?

Among perennial species of the ridges are plants once gathered for food by coastal communities. Sea beet, Beta vulgaris maritima, cooks down to a sort of spinach, but seakale, Crambe maritima, is a far more substantial, a kind of cabbage. Its blanched spring shoots are a treat long grown in superior vegetable gardens.

Seakale’s large seeds are waterborne and the plant’s long tap root can push down through shingle two metres or more to find fresh water. Quite how common it ever was is far from clear. Botanist Dr Peter Wyse Jackson, in his encyclopedic Ireland’s Generous Nature (2014), found sea beet still collected in Ireland as “a useful winter and spring vegetable” and sold as “organic” in country markets. But seakale is reduced to “probably no more than 20 wild plants” that ought to be left alone.

Habitat 1220 is one of 58 habitats, closely defined in the EU nature directive, that Ireland must protect and report on every six years. At the last assessment, reported in 2014, only 9 per cent were in “favourable” condition.

The vegetation of shingle banks is singled out for protecting specialised, pioneering plants that have adapted to extreme conditions. An even deeper and wilder Atlantic could bring change that reaches too fast and too far.

Michael Viney’s “Reflections on Another Life”, a selection of columns from the past four decades, is available from irishtimes.com/irishtimesbooks