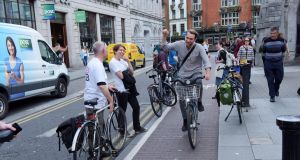 The cyclists, members of the newly formed campaign group I Bike Dublin, want to educate motorists in the laws surrounding cycle lanes, and to protect cyclists from the dangers posed by illegally parked vehicles.

Cycle lanes are reserved 24 hours a day for cyclists, unless an upright information sign shows another period of time.

At “mandatory” cycle lanes, those with a continuous white line, parking is prohibited, and drivers may only cross the white line in the case of an emergency or to enter a side road or driveway.

Divers may park in a non-mandatory lane – those with a broken white line – but only for up to 30 minutes if they are loading or unloading their vehicle and there is no other parking available.

The Andrew’s Street cycle lane is one of the few contraflow lanes in the city, where cyclists travel in the opposite direction to traffic on a one-way street. Cyclists must use contraflow lanes where they are provided, so when a motorist parks in the cycle lane, cyclists cannot use the route.

“Cyclists are being hurt and killed, in many cases because of a lack of consideration from larger road users,” campaign organiser Stephen McManus said. “We need to make cycle lanes places where cyclists are safe.”

This is the second protest the I Bike group has undertaken in Andrew’s Street. Last week campaigners were involved in a stand-off with a van driver who tried to park in the lane.