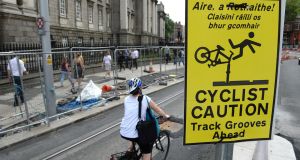 Warning sign at Luas track at College Green: In January, a cyclist whose wheel got caught close to the Spire said, “My head took all the impact and if I wasn’t wearing a helmet my head would have been split open like a melon.” Photograph: Dara Mac Dónaill

Following complaints after a number of crashes, the firm laying the Luas Cross City line argued infilling rail grooves was an unsatisfactory way of dealing with cycling hazards and that cyclists needed to adapt to new road layouts.

However, Mr Toole argued there was no way to satisfactorily fill a rail groove with macadam and ensure it remained safe.

In correspondence released under the Freedom of Information Act, he said Sisk did not want “to take responsibility for makeshift solutions that we can’t stand over”.

Filling tracks during the construction process was “simply kicking the can down the road and storing up a bigger problem”, he warned.

Ultimately, Mr Toole said, cyclists may have to be prohibited from using certain routes. In September 2016, Mr O’Mahony wrote to the Sisk project manager saying track grooves between Westmoreland Street and O’Connell Street needed to be filled after a cyclist came off their bike when their wheel got stuck on O’Connell Bridge.

“This is a messy one,” Mr Toole replied. “We need to ensure that filling of the rails is the exception rather than the norm, as grooved rails will be a fact of life. We don’t want people saying that they are usually filled and we neglected to fill one somewhere (as now appears to be the case here).

“We also don’t want to be in the position where someone falls (or says they fell) in a filled section saying we haven’t filled the groove ‘properly’, as there is no proper way to fill a groove.”

Later that month, another cyclist wrote to Luas Cross City (LCC) saying she needed nine stitches to her chin after her wheel got caught in the track on Parnell Square.

Mr O’Mahony again wrote to the Sisk project manager, asking for the track at Parnell Square South to be assessed. “The policy adopted on LCC is for track grooves to be filled where traffic is forced to traverse along track or where traffic must cross the track at a shallow angle,” he said.

In response, the Sisk project manager said cyclists would instead have to adapt their behaviour. “Despite exhaustive efforts, nobody has managed to find an approved method of filling rail that we can all stand over and which allows cyclists to not have to adapt their behaviour to allow for a rail. In at least two cycle incidents where the rail has been filled, the cyclist suggested that we had not infilled the groove ‘properly’. We would be delighted to hear how a rail can be filled ‘properly’.”

Mr Toole said infilling a rail improperly “starts to bring us into the firing line” because it involves swapping an approved design with one which has not been through international safety audits.

He said all filling would have to be removed anyway by the time trams started running and cyclists would need to adapt to that. “The permanent and mandated design is filled with locations where cyclists will negotiate rails at oblique angles in order to make turns, circumvent parked buses, taxis, delivery vans, pedestrians stepping off kerbs, stop platform buildouts etc.

“We just want to be sure that we are adopting the right approach for this issue for which nobody (including rail operators worldwide and TII who have mandated this rail design) has found a fool-proof solution.”

By late October, Mr O’Mahony asked that the matter be raised at a traffic forum meeting, saying the contractor has made “no attempt” to fill track grooves to facilitate cyclists traversing to Parnell Square South. “I strongly recommend that all track grooves at the Parnell Delta are filled,” he said.

In early December, the Sisk project manager wrote to various officials saying Sisk did not intend to temporarily fill rail near Trinity College following another crash. “This ‘solution’ (which no one can stand over) is simply kicking the can down the road and storing up a bigger problem,” he said.

“A decision needs to be taken at the highest levels as to whether it is safe to allow cyclists and trams share carriageway in the future. Ultimately this cannot be a contractor decision.”

In January, a cyclist contacted the LCC saying she fell after her bike got caught in the track near the Spire on O’Connell Street. “My head took all the impact and if I wasn’t wearing a helmet my head would have been split open like a melon,” she wrote.

In an internal email, Mr Toole said banning cyclists was not within the company’s power. “Our hands are tied and we do not consider this to be within our power to solve beyond what we have already done – we cannot change the detail or layouts and it is not within our power to ban cyclists from using these routes (although this cannot be ruled out.)”