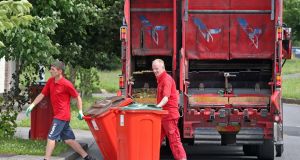 Dublin City Council has called on the Government not to implement the ban on flat-rate bin charges and to establish a national regulator for the waste collection sector.

The council has also agreed that waste management services should be brought back under the control of the local authority.

From September waste firms will no longer be allowed to charge their customers a standard flat fee for bin collection.

While companies will still be allowed to apply standing charges, they must also apply a usage charge such as pay-by-weight or pay per lift.

Some of the biggest operators in the sector including Panda, Greyhound and City Bin have indicated they do not expect prices to rise for customers who are already on pay-by-use systems.

However, half of all households nationally, the majority of which are in Dublin, pay flat fees.

Under the new system, individual operators will be free to set their own prices - per kilo or per lift - and politicians have raised concerns that their constituents will face steep price rises.

Sinn Féin, the largest party on Dublin City Council, on Monday night held a protest outside City Hall against the new system, ahead of a council meeting where it submitted a motion against the charges.

“The Government’s proposals on bin charges are punitive and wrong. They should be immediately stopped,” Sinn Féin councillor Daithi Doolan said.

“There is no waiver system, no mandatory charging system and the changes allow the private waste companies to choose the payment scheme. The new system will have a negative impact on low income families.”

Mr Doolan said “the seeds for the current crisis in waste management were sown by consecutive governments pursuing a privatisation agenda. Simply privatising the industry and walking away is not an option.”

Independent councillor Cieran Perry said the council had brought the problem on itself when charges for waste were introduced.

“The charges directly caused the illegal dumping crisis across this city.”

Cllr Tom Brabazon (Fianna Fáil ) said his party’s group on the council had always been against the privatisation of the service.

“There has, since the charges were introduced, been a proliferation of illegal dumping around the city ...I don’t see how we can continue as we are.”

Green Party councillor Patrick Costello said he supported calls for a regulator but an element of “the polluter pays” should be part of the system.

Labour’s Dermot Lacey said he supported waste charges but also felt there was a need for a regulator and a waiver system.

People Before Profit councillor John Lyons said it was “quite incredible” that Minister for the Environment Denis Naughten had said he had no control over fees charged by waste companies. He said “it’s a disgraceful abdication of responsibility on his behalf”.

Fine Gael councillor Paddy McCartan said the Government’s measure was reasonable. However, his colleague Naoise Ó Muirí said he would be supporting the Sinn Féin motion, which called for the new charges to be stopped, a central regulator to be established and a waiver system for low income families and those with medical conditions.

The motion was passed by 37 councillors with just two voting against. A People Before Profit motion calling for control of waste to be returned to the council passed by 36 votes to seven.