How many birds can the natural world support? 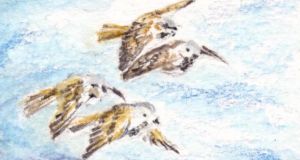 How many must die?: a flight of young sparrows. Illustration: Michael Viney

Apart from our evening swirl of swallows, swooping for midges between the trees, the acre has fallen rather quiet. This follows an avian breeding season well supplied with insects, undoubtedly productive and altogether well achieved.

After bevies of blackbirds, tribes of tits and troops of fledgling wrens, one can wonder what will happen to them all. Given what we know of today’s ecological hazards, it’s no challenge to suppose that millions of each year’s surplus of new birds will be winnowed by man-made mortalities rather than by natural risks and predators.

There was a time, however, before today’s rush of traffic, web of wires, maze of mirrors, rows of wind turbines, pesticide poisoning, proliferating hordes of household cats and so on. Then it could be wondered what set natural limits to populations of birds. For many ornithologists such basic ecological questions still warrant research.

Browsing the internet for current propositions, I was delighted to come upon a paper by the ornithologist W Grainger Hunt, who studies golden eagles and other Californian birds of prey.

It is headed “C.B. Moffat’s anticipation of twenty-first century bird population dynamics theory” (in Ibis, an international journal of avian science, from October 2015). This conjures, unexpectedly, a name from the rich record of Ireland’s amateur natural history.

Charles Bethune Moffat (1859-1935) has been widely recognised at home. Robert Lloyd Praeger thought him “the most brilliant naturalist – in the Gilbert White sense – that Ireland has produced”, adding: “Within a most unimpressive head he carried a remarkable brain.” However well deserved, to find Moffat getting international credit for formulating ideas a century ahead of their main debate is fairly stirring.

Moffat was born in the Isle of Man, but his parents moved to settle in Ballyhyland, Co Wexford. He entered Trinity College Dublin at 16, graduated well in law, but was attracted instead to Irish journalism.

He was already shy and self-effacing, his output chiefly of columns about nature; his colleagues in the city’s newsroom of the Daily Express came to joke about his “bird-like” demeanour. They would not have been surprised, one said, “if Moffat flew in and lighted on the gas bracket”. He may, rashly, have mentioned going off, straight after work at 2am, to study the birds in Phoenix Park at dawn.

By that time his boyhood explorations of the Co Wexford countryside and tireless observation and meticulous record of wildlife had matured into significant articles in the Irish Naturalist, the journal edited by Robert Lloyd Praeger. He was also, later, mainstay of a new Irish Society for the Protection of Birds.

The article singled out by Grainger Hunt was from 1903: The Spring Rivalry of Birds: Some Views on the Limit to Multiplication. Written many years before the ringing of birds (pioneered by another Irishman, James Burkitt, banding robins in his Enniskillen back garden in the 1920s) did so much for ornithology, this sprang from Moffat’s own observation and reflection.

He was one of the first to conclude that the main reason cock birds sing is to claim their territory. But he then went on to propose that what creates the population “equilibrium” for a bird species is the number of available territories.

Moffat, although a keen Darwinian, was reluctant to accept the fashionable theory that “nature red in tooth and claw” was necessary for a population to remain stable and that as many as 90 per cent of new young birds must die. Territory, he argued, “results in such a parcelling out of land as must limit the number of breeding pairs to a fairly constant figure and prevent indefinite increase . . . at the same time condemning the less powerful individuals to unproductiveness rather than death”.

It is obvious today that species have adapted to the most productive nest sites in particular habitats, such as the right kind of cliff ledges for the roll of conical guillemots’ eggs, or enough holes for little tits. Protection of habitats – or restoring those lost, as in making new roof-high holes for swifts – is basic to today’s conservation of nature.

It took nearly a century of “tortuous development of the theory of avian population dynamics”, Grainger Hunt writes, to arrive at refinement of “Moffat’s equilibrium” – this often without reference to his work. Modern research explored the limiting role of food supply, the fate of “floaters” (nonbreeding adults) and the result of couples settling for poor-quality nest sites with low reproductive success.

Hunt, meanwhile, has been most directly concerned with the fatal impact of wind turbines on California’s tree-nesting golden eagles. In another paper this year he and his team estimated that “the entire annual reproductive output of 216-255 breeding pairs would have been necessary to support published estimates of 55-65 turbine blade-strike fatalities per year”.

If, however, they concluded, golden eagle populations have enough “floaters” of both sexes, these might take up vacant territories to restore the birds to “Moffat’s equilibrium” – an outcome he would, no doubt, have found most gratifying.