Earth Day in Ireland: List of main events this weekend 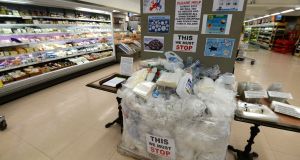 A display of plastic at Nolan’s supermarket in Clontarf, north Dublin, explaining how the supermarket plans to tackle the problem of excessive plastics. Photograph: Alan Betson/The Irish Times

A “shop and drop” day of action on plastic packaging at supermarkets on Saturday and community cleanups of waterways, beaches and public areas over the weekend are being organised to mark Earth Day on Sunday.

Pleasant spring weather forecast for Saturday is expected to help those organising clean-ups by community groups and volunteers who will be targeting polluting plastics and litter and cleanups of rivers and canals.

Earth Day has been staged every year since 1970 “to demonstrate support for environmental protection” throughout the world.

“Infinite growth of the plastics industry and over-consumption of single use plastic is unsustainable,” he said.

“The world had reached a tipping point in terms of our planet’s capacity to deal with “the deluge of plastic waste.

“There can be no going back to the business-as-usual now. Earth Day is a great opportunity for citizens across the world to show their desire to rid the world of single-use plastics from our day to day lives.”

The biggest single event in Ireland this weekend is Saturday’s “shop and drop” day of action on plastic packaging which will be held at hundreds of supermarkets across Ireland, which is being organised by environmental groups.

Friends of the Earth director Oisín Coghlan said: “The Earth is our only home. And it’s a miracle of nature, a goldilocks’s planet’: not too hot, not too cold; just right for human life.

“But its ability to feed us and keep us safe is now at risk. Our pollution is destabilising the climate and depleting the soils and the seas.”

“The huge public response to the issue of plastic pollution shows that people do get it and want to protect the environment,” he said.

Dodder Action and the Dublin Canals Group have joined together with Treasure the Tolka; Swords Tidy Towns and Friends of the Camac to clean Dublin’s rivers and canals.

Dodder Action volunteers will clean at 10 points from Old Bawn in Tallaght to the Irishtown Basin, through Firhouse, Rathfarnham, Milltown, Clonskeagh and Donnybrook. For more information see: www.dodderaction.org

Dublin Canals will clean at nine points from Grand Canal Basin through Lesson Street Bridge to Crossguns Bridge to North Strand back to Spencer Dock. For more information see: dublincanalsactionday.ie

All these groups will welcome volunteers (at 10am for the Dodder and 10.45am for the canals).

Equipment and gloves will be provided. “All we need is people, even if they just want to come along for an hour,” said Dodder Action chair Victoria White.

The initiative is part of An Taisce’s National Spring Clean programme, and will be focussing on the proliferation of plastic.

She also called for the introduction of a deposit scheme for bottles and cans which she said account for 95 per cent of litter.

“We hope Dublin Waters Action Day will sharpen the focus of residents and politicians alike on the importance of keeping our waterways clear of pollution.”

As part of Earth Day the Irish Peatland Conservation Council (IPCC) is marking the first World Curlew Day at the Bog of Allen Nature Centre in Rathangan, Co Kildare at 2pm on Saturday.

It is giving a talk on the endangered curlew and hosting a guided walk to Lodge Bog – See: bogs@ipcc.ie

IPCC conservation officer Katie Geraghty said staff and volunteers at the centre looked forward to the return of the Curlew to Lodge Bog each year.

“We are privileged to have them in our locality and it is important that we all work together to help them breed successfully.”

The Rediscovery Centre in Ballymun, Dublin is offering free information tours (at 11am and 3pm on Saturday). Located in the recently re-purposed Ballymun Boiler House, it “challenges conventional thinking about how we live, stimulates positive environmental behavioural change and highlights how we can use our resources wisely to achieve a low carbon, sustainable society”. It is also the national centre for the circular economy.

Jim Lawlor from the Native Woodland Trust will give a talk on native woodlands - a “1,000 year project” - at the Cool Planet experience in Powerscourt estate, Enniskerry, Co Wicklow, on Sunday afternoon.

Also coinciding with Earth Day, a project raising awareness of the impact of microplastics on the Irish coastline was announced on Friday.

“IMPACT: The Microplastics Awareness Project” is led by scientists from Dublin Institute of Technology (DIT) – it will host interactive science workshops “on the beach and in the classroom” over coming months to encourage young people to tackle the threat of microplastics and plastic waste in their local communities.

Artists have created enormous works of art across Europe to protest against plastic pollution in the run-up to Earth Day. Sand etchings up to 30 metres in diameter depicting sea creatures battling with plastic waste have appeared on beaches in France, Spain, Portugal, the UK and Germany during April.

A final piece is set to be created on the Dutch coast on Saturday by the artist Tim Hoekstra, who has campaigned against plastic pollution since 2013.

“Every time I come to the beach, I see washed up plastic, mostly food and drink packaging. It has got much worse in recent years. It makes me sick to think that our kids might never know what a clean beach or water is really like,” Mr Hoekstra said.