Weather to become wetter before it gets better 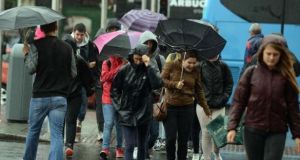 Brollies out: A rainfall warning has been issued by Met Éireann. Photograph: Cyril Byrne

Met Éireann has issued two yellow weather warnings as heavy rain and strong winds are forecast for the next 24 hours.

The yellow rainfall warning is in place for counties Galway, Mayo, Sligo, Clare, Cork, Kerry, Tipperary and Waterford until 9am on Tuesday. Met Éireann said rainfall accumulations of 25 to 50mm are expected over the period, with the potential for higher amounts on hills and mountains. The forecaster said there is also the possibility of localised spot flooding.

A wind warning is in place for the entire country until 6am on Tuesday. South to southeast winds are expected to reach mean speeds of between 50 and 65km/h with gusts of between 80 and 110km/h.

Winds will be strongest along Atlantic coastal counties at first but the strong winds will extend countrywide through the course of Monday afternoon and evening.

Some drier and milder weather will develop from Tuesday but it will turn unsettled again later in the weekend and for early next week. Temperatures are expected to between 17 and 18 degrees on Wednesday and Thursday.

Met Éireann said Tuesday will be wet at first over eastern counties but it will brighten up later in the day with highest temperatures of between 13 and 16 degrees.

Temperatures will cool a little on Friday with a few showers, mostly in northern counties.