Sunshine and high temperatures finally arrive, but only for a while 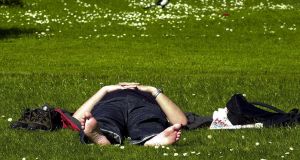 It’s not quite summer, but it feels like it. File photograph: Eric Luke

Winter may have taken its time to disappear but temperatures across the State appear to have skipped straight to summer - for a little while, at least.

By early afternoon on Thursday temperatures had risen to 18 degrees in parts of the east of Ireland.

The highest temperature of the year to date - 20 degrees - was recorded on Wednesday in the Phoenix Park in Dublin. That temperature is expected to be matched on Thursday afternoon.

However, it does not come near the temperatures being experienced in the UK. A thermometer in Northolt, west London hit 27.9 degrees on Wednesday, the highest April temperature in Britain since 1949.

The good weather even prompted a gidiness among Met Éireann forecasters, who have often been the bearers of bad news in recent weeks.

Joanna Donnelly tweeted a picture of some washing on the line and added: “I need to hear the words. Say it with me. Come on! Say It! #GreatDryingOut”.

She advised everybody to make the best of the weather as “we are looking at some rain coming in on Saturday evening and Sunday is a cooler day.”

According to Met Éireann it will be rather cool and foggy this evening but Friday will be dry and sunny with temperatures again hitting the high teens.

The temporary good weather is thanks to a ridge of high pressure from the Continent replacing the cold air which has been dominant since the cold snap of early March.

The current of wind above the North Pole which brings us our normal winter weather, was disturbed and the jet stream drifted southwards bringing in cold air from the north.

It led to March being one of the coldest in some parts of the country for 50 years.

“It was an extreme weather event,” Mr Moran said. “These events have happened in the past. The weather has a natural set of extremes and a natural variation and this is within normal variation.”