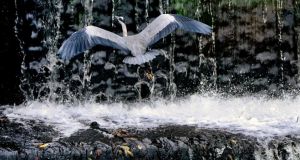 A heron flies over the Dodder waterfall. Photograph: Cyril Byrne

A small river runs along the end of the garden attached to the house in which I grew up. As a child, I spend hours catching handfuls of tiny eels, building huts on the riverbank and paddling in the muddy waters. It’s not surprising that Peter Gabriel’s Washing of the Water – in which he evokes the healing power of the river – is one of my all time favourite songs.

The American environmentalist David Brower has said: “We must begin thinking like a river if we are to leave a legacy of beauty and life for future generations.” Perhaps the international movement to give rivers, mountains and forests legal rights similar to that of human rights is doing just that.

This “rights of nature” movement has grown from one law adopted in a small community in the United States to a global phenomenon where countries enact laws and constitutional protections for parts of the natural landscape.

In 2008, Ecuador became the first country in the world to enshrine the rights of nature into its constitution. New Zealand granted “legal personhood” to the Te Uruwera forest in 2014 and to the Whanganui river and Mount Taranaki in 2017.

In Australia, traditional owners along the Kimberley’s Fitzroy river are looking at ways to create legal personhood for their river. Their 2016 Fitzroy river declaration recognises the river as a “living ancestral being with a right to life” and includes traditional owners’ obligations to protect the river. In March, a community rally on the Margaret river in western Australia called for the river to be recognised as a legal entity with the local council as its custodian.

In Ireland, rivers trusts are developing as community-led charities to manage rivers. While not quite the same thing as giving the river legal status, these organisations aim to bring together anglers, farmers, community and environmental groups keen to protect their local river.

“In the past, towns in Ireland turned their backs on their rivers but we are now looking at the value of rivers for quality drinking water, ecotourism, biodiversity and ultimately to support healthy communities and economic development,” says Bernie O’Flaherty, one of three regional co-ordinators with the Local Authority Waters and Communities Office, which financially supports the development of rivers trusts in Ireland.

In the UK there are more than 40 rivers trusts, some of which employ environmental engineers to carry out large infrastructural works to improve the river catchment. These trusts were often triggered by concern about the decline in species and water quality or a pollution incident killing fish and other wildlife.

“Rivers trusts are at a fledging stage in Ireland. We are looking at the model which is working very well in the UK where there is a strong ethos of volunteering around nature,” says O’Flaherty.

“Some of these UK trusts manage a river from source to sea but we are also looking at local initiatives through Tidy Towns and community groups which will connect people back to their rivers. A lot of the damage to rivers over the years was caused by a disconnect from nature,” she adds.

The Waters and Communities Office was set up in 2016 as a legal requirement of the European Union Water Framework Directive, a broad-ranging piece of environmental legislation that sets out to protect all waters and their dependent wildlife/habitats.

There are currently six rivers trusts in Ireland (for the Blackwater, Maigue, Nore, Slaney and Waterville rivers) and two cross-Border rivers trusts (for the Erne and Inishowen rivers). A conference in Tallaght Institute of Technology on May 17th will take the first steps to establish the Dodder Rivers Trust as the first urban river trust in Ireland.

“We want the Dodder recognised for its unique resource of Dubliners – its wildlife, its architectural heritage. And a rivers trust will help us get a co-ordinated response to dumping issues and give us opportunities to monitor wildlife and pollution through citizen science projects,” says Victoria White from Dodder Action, the voluntary group which organises regular clean-ups along the Dodder.

One of the tasks of the Waters and Communities Office (watersandcommunities.ie) is to support these fledging river trusts financially for projects to remove/control invasive species, halt erosion, improve stream crossings and restore wildlife habitats.

Sinéad O’Brien from the environmental NGO Sustainable Water Network adds a word of caution: “I think river trusts will be well placed to deliver solutions to some problems but they will need funding to employ staff and contact with people who can broker with the State authorities to solve issues like pollution from septic tanks, forestry run-off, etc.

“It’s very important that the State doesn’t outsource these problems to river trusts. We have all the legal protection for water we need with EU directives – especially the Water Framework Directive – but local groups are only as good as the water governance structure that supports them.”

Held as part of the annual An Taisce-led spring clean in April, volunteers will collect litter from streams, rivers, canals and coasts of Dublin on Dublin Water Actions Day on Saturday, April 21st. All tools, pickers and bags will be supplied on the day.

For a full list of organisers for clean-up events across north and south Dublin on April 21st, see teamdublincleanup.ie.