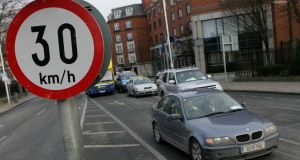 Plans to cut speed limits to 30km/h on almost all residential streets throughout Dublin city and suburbs have been approved by the city council’s transport committee. Photograph: Gareth Chaney/Collins.

Plans to cut speed limits to 30km/h on almost all residential streets throughout Dublin city and suburbs have been approved by the city council’s transport committee.

The extension of the 30km/h limit, to 12 more southside suburbs and 19 on the northside, is part of the council’s plan to cut speeds throughout Dublin city as far as its boundaries with Dún Laoghaire-Rathdown, South Dublin and Fingal.

Ten years ago the council lowered speed limits in the shopping and central business area of the city from 50km/h to 30km/h.

From 2011 the zone was extended as far as Bolton Street on the north side to St Stephen’s Green on the south side, and from Church Street in the west to Gardiner Street and Dawson Street to the east. Parts of the Ballsbridge and Ringsend areas and Marino were also covered by the 30km/h restriction.

Following an 18-month review of traffic conditions throughout the city and suburbs, which drew 550 submissions from interest groups and the public, councillors in December 2016 approved plans for a radical expansion of the speed limit zone to almost all roads and streets, excluding arterial routes, as far as its boundary with the three other Dublin local authorities.

The limits are being introduced on a phased basis. In March of last year they were applied to west of the current city centre 30km/h zone to cover most of the streets between the Royal and Grand canals. Last May, 10 more suburbs were added to the 30km/h zone.

Public consultation on the 31 new zones is expected to begin next month. The limits would be extended into areas including Harold’s Cross, Rathmines, Portobello, Ranelagh and east Inchicore on the southside. On the northside suburbs affected will include Coolock, Artane, Killester, Clontarf, west Cabra, North Wall and parts of Glasnevin, Finglas and Ballymun.

In addition schools located on eight major arterial roads will have periodic reductions to 30km/h outside their premises at their start and finish times. This would affect parts of Long Mile Road, Slievebloom Park, Chapelizod Road, Howth Road, Griffith Avenue, Seamus Ennis Road, Terenure Road East and Clareville Road East. Outside the specified times the limit will revert to 50km/h.

Following the addition of the new zones just a handful of suburbs will remain outside the 30km/h zone. These include Terenure, Rathgar, Clonskeagh and Donnybrook on the southside; Ballyfermot, Bluebell, and Ashtown to the west of the city; and Drumcondra, Whitehall, Donnycarney, Beaumont, Darndale, Northwood and the remainder of Glasnevin, Ballymun and Finglas on the northside.

The next phase, which would extend the limit to these remaining suburbs as far as the city council border, is expected to be introduced next year.