Europe is at an environmental tipping point, says report

EU agency predicts Europe will not achieve its 2030 environmental goals 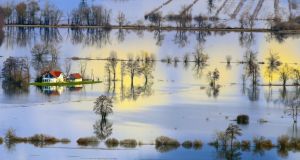 Europe is at an environmental tipping point which threatens its prosperity and the risks go beyond the consequences of human-induced global warming, according to a European Environment Agency (EEA) report.

Its State of the Environment Report (SOER), published on Wednesday – which will be outlined at COP25 climate talks in Madrid – predicts Europe will not achieve its 2030 environmental goals and so risks undermining its ability to decarbonise in coming decades.

It indicates, however, there is reason for hope, due to increased public awareness of the need to shift to a sustainable future; the pace of technological innovations, and stepped-up EU action, notably the imminent European new green deal.

We have a narrow window of opportunity in the next decade to scale up measures to protect nature...

Most solutions are already identified but they risk failure if they are not implemented with the required urgency, concludes the report which evaluates data from 39 countries, and is used to frame EU climate and environmental policy.

While European policies have improved the environment, there is not enough progress and the outlook for the coming decade is not positive, the report found.

“A business as usual approach will not cut it,” warned EEA executive director Hans Bruyninckx.

“We have a narrow window of opportunity in the next decade to scale up measures to protect nature, lessen the impacts of climate change and radically reduce our consumption of natural resources,” he added that incremental changes have made some progress but not nearly enough to meet long-term goals.

“We already have knowledge, technologies and tools needed to make key production and consumption systems such as food, mobility [transport] and energy sustainable. Future wellbeing and prosperity depend on this and our ability to harness society-wide action to bring about change,” Mr Bruyninckx added.

He said Ireland’s biggest task was to improve its carbon emissions curtailment; most notably in transport and agriculture.

SOER 2020 is the most comprehensive environmental assessment ever undertaken on Europe. It provides a snapshot of where Europe stands in meeting 2020 and 2030 policy targets as well as 2050 goals in shifting to a sustainable, low carbon future.

It acknowledges progress over the past two decades in cutting emissions. Signs of progress are also evident in tackling air and water pollution, addressing plastic waste, “and bolstering climate change adaptation [to address physical impacts of global heating] and the circular and bio-economy”.

The EU’s sustainable finance initiative means the bloc’s financial sector is driving the necessary shift to a sustainable future – a world first. But based on current delivery rates, Europe will not achieve its sustainability vision of “living well within the limits of the planet by continuing to promote economic growth and seeking to manage the environmental and social impacts”.

The report calls on Europe’s leaders and policymakers to use the next decade to radically scale up – and speed up – actions to put Europe on track “to avoid irreversible change and damage”. Investing in sustainability while stopping subsidies for environmentally damaging activities, especially fossil fuels, are needed. “At the same time, it will be crucial to listen to public concerns and ensure widespread support for such a shift – a socially-fair transition.”

The report “is perfectly timed to give us the added impetus we need as we start a new five-year cycle in the European Commission and as we prepare to present the European green deal”, said commission vice president Frans Timmermans. “If we get this right, and our economy and our planet will be winners too.”