Bring back my bunny to me: Readers’ nature queries 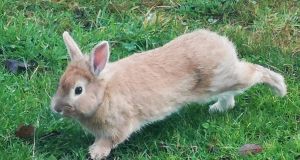 This animal has been visiting my garden every day for more than a month. Is it a hare or a rabbit? He is worryingly unafraid. – Polly Ballard, Glencree, Co Wicklow
It seems to be a pet rabbit that either wanders or is lost.

I was visiting my daughter in Dubai, where her children love collecting shells. Eva found this polished one on the beach. – Mary Guy, Bray, Co Wicklow
It’s a cowrie shell, probably the tiger cowrie.

Whooper swans have arrived on the Broadmeadow estuary at Swords, Co Dublin. Two adults and six young arrived on November 15th and two days later another party arrived. Whoopers are not that common around Dublin, so these were a great treat. – Francy Devine, Howth, Co Dublin

What is this ringed, disc-like fungus? We spotted it growing on a fallen birch branch by one of Co Kildare’s nature treasures, Ballinfagh Lake. – Michael Quinn, Maynooth, Co Kildare
It’s hoof fungus, a bracket fungus also called tinder fungus. It burns very slowly and was used in ancient times to carry fire from one place to another.

Near the top of Telegraph Hill in Killiney on November 21st, a chilly breeze was waving the tops of the Scots pines, among which I saw a cloud of midges. – Susan Flynn, Ballybrack, Co Dublin
Midges hang around quite late in the year depending on the environment. Their numbers decline in October and are usually gone entirely by December.