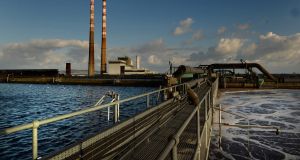 Irish Water has said there remains a risk of overflow of wastewater into Dublin Bay, following the failure of two pumps at the Ringsend Wastewater Treatment Plant on Wednesday .

Following overnight works at the plant, which processes 40 per cent of the State’s public wastewater, Irish Water said one of the damaged pumps was expected to come back into operation by about mid-morning on Friday.

There are normally between two and four pumps operating at the plant at any given time, with a fifth pump on standby.

However, the standby pump was taken out of service on Tuesday for routine maintenance, and this was followed by a “mechanical failure” which caused two of the remaining pumps to break down.

With three of the full complement of five pumps not working, Irish Water said a decision was taken to utilise stormwater tanks “to balance the flows while repairs are progressing”.

While this situation continues there is an ongoing risk of overflow from the plant should a sudden downpour occur, the utility said.

A spokeswoman for Irish Water said the two pumps currently in use were “capable of pumping the average daily flows to the plant”. She said the third and fourth pumps were only required during peak flows, while the fifth would normally be held in “reserve”. The spokeswoman said repair works were progressing well and the return to operation of one of the pumps would “reduce the risk”.

Met Éireann has forecast only occasional rainfall in the relevant region up until Saturday night, when heavier rain is expected. The forecaster said Thursday would only feature rain and drizzle “at times”, while Friday would see “scattered showers, possibly heavy during the first half of the day”, before largely dying out later. The weekend outlook is for unsettled and changeable weather which will continue for most of next week.

Irish Water has made the upgrade a key priority since it took responsibility for water and wastewater services in 2014.

A number of bathing bans were implemented during the summer and autumn following overflows of wastewater at water treatment facilities and pumping stations, including Ringsend.

Two boil water notices had to be issued for the greater Dublin area in recent weeks following mechanical issues which led to water clouding and an increased risk of contamination at the Irish Water treatment plant in Leixlip.

That plant treats water for an estimated 600,000 people, all of whom were put on boil water notices for days at a time following the faults.

PSNI’s Deputy Chief Constable set to retire at end of month 20:50
New code to cap salaries of special advisers to North’s Ministers 20:39
Gardaí making ‘good progress’ on Cork attack where man was set on fire 20:24
Colm Burke vows ‘not to be deterred’ after Cork office was vandalised 19:47
Finding of poor professional performance against GP over thyroid cancer case 19:41