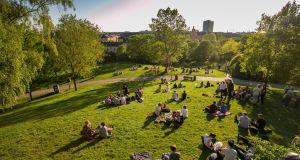 An analysis of 40,000 transactions and proximity to parks and green spaces including water shows parks have the most positive effect. Photograph: iStock

Having a house or an apartment in Dublin which is within walking distance of a park significantly adds to its property value , an environment conference has been told.

There was a case for the increased property values to be reflected in higher local property taxes, and for the additional revenues be used for park developments in the capital, suggested TCD economist Dr Ronan Lyons.

An analysis of 40,000 transactions and proximity to parks and green spaces including water shows parks have the most positive effect.

It suggests Dublin Parks have an aggregate value of €3.4 billion when capitalised into the nearby housing stock. If increased property tax was applied, it would generate €6 million a year in extra revenue, which could be ringfenced for park development, he told the conference hosted by the ESRI and EPA.

“We found a 10 per cent increase in park space within 2 kilometres (i.e.walking distance) of a dwelling is associated with a 5.5 per cent in that dwelling’s value,” Dr Lyons added.

While the research was on-going and the findings were preliminary, the value of green space was clear, he said, though there was no evidence of an additional effect on housing beside the Phoenix Park, while congestion issues often arose living within 200 metres of a park.

With urban development, he said, it was often regarded as a choice between “fat cites” and “tall cities”. Dublin has been “quite fat over the past 30 years, and unnecessarily so”.

There was a policy shift happening; keeping the same footprint but allowing for more density, but “non economic factors” such as “green and blue [WATER]space need to be front and centre”. The grey (buildings) to green ratio had to be rebalanced.

Prof Mark Scott of UCD School of Architecture said Dublin parks suffered during the period of austerity. A re-positioning recognising their role in promoting health was warranted.

As density was being increased the issue of green buildings, green walls and green roofs would all become important, but parks should apply the “8-80 approach” by catering for everybody from aged 8 to 80, rather than for instance a policy of installing sports pitches which generally favours males.

Planning regulator Niall Cussen said there was a marked difference in where people were living – extending over a wider area in Ireland – and working; in more concentrated areas where the knowledge economy was based, including a high level of social interaction, innovation and access to learning.

That said, there was a renaissance in planning that factored in all elements including health and wellbeing. People wanted to live closer to physical amenities, their employment, culture and heritage; “avoiding car-based commutes, and generating more time for families”.