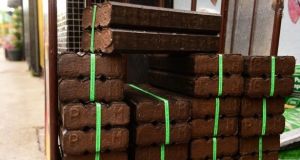 Ireland is set to be allocated €30 million in grants from a European Union green fund to help ease the transition away from peat production. Photograph: Cyril Byrne

Ireland is set to be allocated €30 million in grants from a European Union green fund to help ease the transition away from peat production.

The money is expected to help with retraining workers at power plants like Moneypoint in Co Clare.

The funding is being earmarked for Ireland from a €7.5 billion fund to be established as part of a “Just Transition Mechanism” to help wean member-states off carbon-based energy production such as coal and peat, which is a key element of the European Commission’s Green Deal initiative.

The commission on Tuesday announced it would mobilise some €1 trillion in investment, aid and loan guarantees over the next seven years to fund the Green Deal. The scale of such funding, however, will depend on the outcome of difficult negotiations currently under way on the union’s budget for 2021-27.

The commission last night set out tentative national allocations from the proposed Just Transition Fund (JTF) which will provide grants ranging between €2 billion for Poland to €4 million for Luxembourg.

These will have to be supplemented by member states by up to three euro for every euro received from their national allocations of EU regional and structural funds.

The fund has been proposed as a response to concerns expressed by several eastern states that emissions targets, notably the commitment to be carbon-neutral by 2050, are particularly onerous on economies traditionally based on coal production.

Poland had been the only state to refuse at the December summit to commit to the 2050 carbon-neutrality target. The commission hopes the JTF proposals will help it come on board.