Beef farmers give guarded welcome to talks with retailers 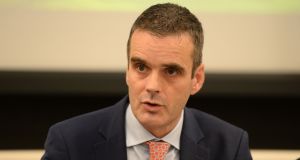 IFA president, Joe Healy, said he informed the supermarket groups that the unsustainable discounting of top quality beef was a race to the bottom that had to stop. File photograph: Dara Mac Donaill / The Irish Times

Farmer representative groups have given a guarded welcome to their first face-to-face meeting with the country’s major retailers at a resumed hearing of the Beef Taskforce in Dublin on Thursday.

However, they insisted that progress still needed to be made in the near future on prices paid to farmers to prevent a return to further protests and blockades which took place outside the premises of beef processors and distributors before Christmas.

Farming organisations including the Irish Farmers’ Association gave a positive reaction to indications by the main supermarket groups of flexibility around the requirement that all beef supplied to retailers come from cattle under 30 months.

It followed day-long talks at the Department of Agriculture which was attended by representatives of all the main supermarket groups – Tesco, Dunnes Stores, SuperValu, Lidl and Aldi.

At the same time, the farming bodies claimed the focus needed to return to prices paid to farmers by the beef processors who were represented at the meeting by Meat Industry Ireland.

IFA president, Joe Healy, said he informed the supermarket groups that the unsustainable discounting of top quality beef was a race to the bottom that had to stop.

Mr Healy said prices paid to beef farmers were unsustainable and could not continue at their current loss-making levels for farmers.

“Retailers and factories, who work together, must pass back higher market returns with a significant and immediate price rise to farmers,” Mr Healy said.

The Irish Cattle and Sheep Farmers’ Association said the major retailers had given no coherent indication that the requirement by supermarket groups for cattle to be under 30 months of age was as rigid as beef processors had led them to believe.

It is understood that Tesco was the only retail group that insisted on the 30-month requirement.

The president of the Irish Creamery Milk Suppliers’ Association, Pat McCormack, said it had been a useful meeting as most supermarkets had indicated they would be happy to accept animals up to 36 months instead of the perceived norm of 30 months.

Mr McCormack said the gap in prices paid to beef farmers in Ireland and Britain “needs to be closed out with immediate effect”.

Maicre na Feirme president, Thomas Duffy, described the meeting with retailers as “an important step” as there was an acknowledgement by all parties that their primary concern was the quality of Irish beef.

However, Mr Duffy maintained the key issue was the lack of movement on prices paid to beef farmers at a time when many farmers were making important decisions about their future.

“If the retailer wants to supply that top quality beef, farmers need to be paid for it,” Mr Duffy said.

Enda Fingleton, a representative of the grassroots Beef Plan movement, said retailers had supplied information at the meeting which they could use to formulate a plan for achieving better prices for farmers.

“We can’t say we got a price increase but the industry spoke about green shoots and it’s time to see the green shoots – putting money in farmer’s pockets,” Mr Fingleton said.

He claimed farmer groups and retailers shared a lot of “common ground” on other issues including the promotion of Irish beef in export markets.

Mr Fingleton added: “I just hope the price issue does not put farmers out of business before we can get those things up and running.”

MII and supermarket representatives left the meeting without commenting.

Retailers indicated at the meeting they would co-operate fully with an independent review of market and customer requirements to be carried out by consultants, Grant Thornton, hired by the Beef Taskforce. It will include an examination of bonus criteria paid out for cattle of a certain age by beef processors which farmers claim unnecessarily lowers the price paid for older animals.

Meanwhile, Beef Plan has confirmed its national committee has deferred planned elections across the country following a major dispute within the organisation over governance rules and transparency.

A meeting of 250 members in Lackagh, Co Galway on Wednesday to elect local representatives was abandoned amid angry scenes after a leading figure in the movement, Eoin Donnelly was not allowed be put forward as a candidate.

Mr O’Brien expressed hope that an extraordinary general meeting of Beef Plan on January 26th would allow for the return of greater unity within the organisation.

“We need to sort this out before it becomes a national embarrassment,” he added.