A day in the Phoenix Park: ‘It feels like the most peaceful place on Earth’

Tourists spot deer, a child waits for ‘the big gorilla’ and a ‘leprechaun on steroids’ drives a bus 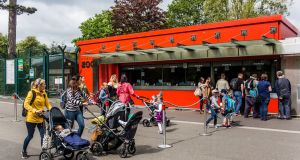 The sky is still a murky grey when there is a flash of yellow Lycra among the trees, the first sign of the early-morning runners who pound the pavements and grass of the Phoenix Park each day.

The park’s famous deer are nowhere to be seen. Soon, Chesterfield Avenue, the spine of the park, yet again becomes a bustling throughway, with lorries squeezing through the main gate; cars overtaking cyclists and cyclists overtaking electric scooters.

More than 20 gardeners look after the park, arriving at 8am each day. Working here is no chore, says head gardener Meeda Downey: “Different things crop up. It doesn’t feel like you are coming to work at all.

“The public are very appreciative too. They come up and tell you what a great job you’re doing. It puts you in a good mood,” she says, though she emphasises that where they can, they leave nature to its own devices to encourage biodiversity.

Shortly after 10am, the first busload of tourists pulls up in the park, for a welcome break from congested roads. Driver and tour guide Bill Dunne (50) slows, letting passengers take snaps of the Wellington Monument and “ooh” and “aah” at the deer.

Dunne, who is from the Liberties, has been slowing down the Hop-On Hop-Off bus for Áras photos and the park’s other attractions for nearly 14 years, but he never tires of it.

“Dublin is soaked in history, so it’s not too difficult bringing the ‘céad mile fáilte’ every day,” Dunnes says. His boisterous charm is appreciated by his passengers, who have started referring to him as the “leprechaun on steroids”.

Americans are particularly keen on the park, surprised by the resemblance between Áras an Uachtaráin and the White House. Quickly setting them straight, Dunne says: “I tell them the White House resembles the Áras. Ours was built first, and that’s very important.”

Three-year-old Lili Deleo, who lives in nearby Chapelizod, visits the park almost every day with her father, Niall Deleo (42), and their dog, Bob.

“We just love it here,” says Niall. “She gets to see nature, the deer and play with other kids.” However, he worries that the Office of Public Works’ consultation threatens to “commercialise” the park. “If it ain’t broke, don’t fix it,” he believes, though he would prefer less traffic on Chesterfield Avenue.

In Dublin Zoo, three-year-old Teddy McCann is restless with anticipation as he waits to see the “big gorilla”. He has been here many times before, says his grandmother, Diane Nelson, but the excitement never wanes.

“We usually get him an annual pass for his birthday. He gets the monthly magazine so he gets very excited about coming to see the animals,” she says.

Dublin hurler Conal Keaney (36), of Phoenix Park Bikes, has supplied bicycles to visitors for six years. Overseas people come in their droves, though Mr Keaney believes that many more Irish could take advantage of “the beauty on their doorstep”.

Despite working long days, he remains in awe of the park: “No day is ever the same. We are meeting people from all over the world,” he says. “To be out here surrounded by squirrels and birds ... It’s a real privilege.”

By evening the park has become home to the cricketers in the Phoenix Park Cricket Club, which has used a plot in the east of the grounds for 200 years – one that is the envy of many of their rivals, says Birmingham-born coach Stephen Moreton.

“To have this as a place where kids of five or six can enjoy and stay on until they are 85 or 95 years old, as many of our members are, is just wonderful,” he says. “When you are here it feels like the most peaceful place on Earth,” he says.