Big plans for Phoenix Park: ‘Doing nothing was not an option’

The park’s facilities are ‘creaking’, says OPW, but there has been disquiet about changes 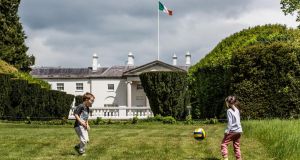 Visitors to Dublin’s Phoenix Park had been happily motoring along – literally, for the most part – until suddenly they were hit with the news that the 360-year-old park, the largest enclosed park of any European capital city, was facing change.

Change to beloved cultural institutions or amenities of any sort is generally deeply unpopular, but talk of funicular railways, driverless shuttles or “road trains” caught many park users like its famed deer in headlights.

The Office of Public Works (OPW) is undertaking a strategic review of the visitor experience provided by the park, and such is the public interest, it extended the public consultation period, which had been due to end on April 26th, until Friday, May 31st.

While the more ambitious projects, such as the repurposing of the Magazine Fort on Military Road as a visitor attraction – with the possible addition of the funicular railway, the construction of glowing “welcome pavilions” and the expansion of the Ashtown visitor centre – have attracted the most attention, the overarching principle is to improve facilities, OPW chief park superintendent Margaret Gormley says.

“The 1,752 acres of the Phoenix Park are cherished by Dubliners and visitors alike, but in some ways it is a victim of its own successes. Some of its infrastructure is creaking at the seams, and the OPW came to the conclusion that to safeguard the park for the future the ‘do nothing’ scenario was not an option.”

At the most fundamental level the lack of toilets needs to be addresses, she says. “There aren’t enough toilets in the park. The Phoenix Park Visitor Centre [at Ashtown] gets 1.7 million people through the gate annually, but it was built 20-plus years ago for much smaller numbers, and needs much greater public facilities, including toilets.”

The OPW wants to redevelop the current Ashtown Demesne cafe as a children’s education centre and build a larger cafe and visitor centre, as well as allowing for extensive car-parking facilities.

The second major project would be the restoration of the Magazine Fort, built in 1736 to store gunpowder and ammunition for British army. The plan envisages exhibition facilities, a shop and cafe, a rampart walk and moat walk, with potential for a funicular railway to pull passengers up the steep hill from Chapelizod Road.

“This has the potential to make a connection with the Memorial Gardens at Islandbridge at the point where a new bridge will be built across Liffey,” Gormley says, “but also to act as a hub for a historical military trail in this part of the city linking to the Grangegorman military cemetery and Arbour Hill.”

The strategic review, drafted by Denis Byrne Architects for the OPW, makes proposals for five distinct areas of the park. In addition to the biggest projects at the Ashtown centre and the Magazine Fort, it proposes a “welcome quarter” at the Parkgate Street entrance, with twin pavilions acting as visitor information centres, which “may also glow in the evenings, as lanterns, to summon people, perhaps out of an autumn drizzle”.

At the west end of the park, which takes in Furry Glen and the White Fields, a “biodiversity quarter” with an interpretive centre could be developed, along with more toilets and an upgraded picnic area with a possible “organised” barbecue space. Barbecues, although a frequent occurrence – particularly on either side of the largely traffic-free Furze Road – are currently banned in the park.

Finally, the strategy considers Chesterfield Avenue, the central traffic artery through the park. This could be dotted with playgrounds and temporary and permanent art installations and outdoor exhibitions, but what will probably attract most attention is the proposal for a “driverless shuttle” bus or “road train” carrying 15 passengers at a time. A train station on the underground Phoenix Park rail line that runs from Heuston Station could also be developed on the north side of Chesterfield Avenue, close to the zoo.

There has been some disquiet about the level of intervention proposed and concentration on tourist facilities in the review. The Green Party has called for a move away from construction in favour of “rewilding” the park, so it can remain a natural resource, particularly in a city that needs to promote more high-density living.

However, architect Denis Byrne says this is a misconception of the nature, purpose and origins of the park.

“The Phoenix Park is a very complex organism; certain parts are wild, but certain parts are incredibly ornamental. There is a vast range of landscapes. It was originally a royal hunting park, so even its wilderness was a curated and carefully planned wilderness.”

The review document represents “a bit of blue-sky thinking” rather than a “set of rules” for how the park must be developed, he says.

In preparation for the review his firm studied how parks have developed in other cities, such as in London, Sydney and New York, while the idea of the funicular railway was inspired by Lisbon and the driverless shuttles are already in use in the Bois de Vincennes in Paris. However, Mr Byrne says, a mobility plan for the park could throw up other innovative ideas.

“Who would have thought electric-powered scooters would suddenly be so popular –maybe they’ll be a way of getting around the park.”

Local residents have raised concerns about the more commercial-heavy plans, with the Navan Road Community Council in particular opposing what it says will be “large, expensive, soulless retail units” at the Ashtown and Magazine Fort centres, which will require “an abundance of car-parking spaces”, it says. “Once areas of the park vanish under concrete they can never be returned.”

The OPW shares the concerns about traffic in the park, Gormley says, and would like to develop more sustainable transport options such as the shuttle buses and, eventually, a station, but she says in the short to medium term, given the size of the park, and its use as a commuter route, traffic needs to be managed rather than eliminated.

She stresses that the biodiversity of the park will remain paramount. “There are no plans to change the ethos or the ambiance of the park, but you can retain those aspects and have good-quality toilets.”