Merrion strand risks being declassified as bathing location next year 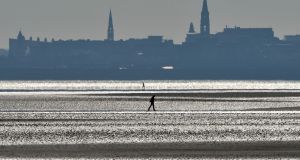 Three of the five waters classified as being poor are in the Dublin region: Merrion strand, Sandymount strand (above) and Portrane beach. Photograph: Alan Betson / The Irish Times

Ireland’s bathing waters are continuing to improve in quality with the vast majority of EU-designated beaches of excellent or good quality, according to the latest EPA evaluation.

In contrast, problems with beaches along the Dublin coastline are persisting. Three of the five waters classified as being poor are in this region: Merrion strand, Sandymount strand and Portrane beach. In the case of Merrion strand, it risks being declassified as a bathing location next year, the EPA warns.

Urban wastewater is “the most common pressure impacting bathing water”, underlining the need for improvement in sewage treatment systems, it added.

The 2018 EPA Bathing Water report published on Thursday shows 94 per cent of the 145 identified bathing waters met the minimum EU standards last year, with more than 100 beaches classified as excellent.

A summer heatwave had a beneficial effect on water quality, it confirmed. Sunshine can improve water quality by killing bacteria and other harmful organisms, while high rainfall increases run-off into sewers and discharges at beaches.

Programme manager of the EPA’s Office of Evidence and Assessment Andy Fanning said: “It is great to see local authorities identifying new bathing waters with excellent water quality. At the other end of the scale, we have five bathing waters that have been classified as poor. More intensive action needs to be taken by local authorities to address the issues and protect the health of bathers.”

In 2018, 55 bathing water pollution incidents were reported, compared to 50 in 2017. Urban wastewater (55 per cent) is the most common problem, followed by contamination from animals and birds (20 per cent), run-off from urban areas and misconnections where waste pipes from households have been incorrectly connected to surface drains, (11 per cent), diffuse pollution from agriculture (7 per cent), Cyanobacteria – a harmful algae (5 per cent), and sewage from boats (2 per cent).

Merrion strand has had a poor rating for the past four years. “Bathing waters have a poor water quality rating for five years in a row, can no longer be identified as a bathing water until the water quality improves,” the EPA noted. Its main difficulty is caused by two polluted streams which flow onto the beach.

Sandymount strand was classified as poor in 2017 and 2018 and faces similar threats. The main sources of pollution thought to be affecting water quality at Portrane (the Brook beach) are septic tank discharges; birds, dog fouling and leaks, spills and overflows from sewers.

The main problems at Clifden beach arise from the public sewer network and a storm water overflow at the town’s wastewater treatment plant. Other potential sources of pollution include discharges from domestic and nondomestic septic tanks in the area.

Lough Ennell (Lilliput) during 2018 had “very high levels of pollution” believed to be caused mainly by agriculture and discharges from septic tanks.

The EPA confirmed it is investigating the human health risk from antimicrobial-resistant microbes increasingly found in bathing waters, while a separate study is examining the potential impact of climate change on bathing waters.

Three new beaches – Dooey and Magheraroarty in Donegal and Seafield Quilty in Clare – were classified for the first time in 2018 and all three were classified as excellent. Bathing waters in south Co Dublin at Forty Foot Bathing Place, Sandycove Beach and White Rock Beach were newly identified in 2018 and will be classified after the 2019 bathing season.

The 2018 report is available at www.epa.ie