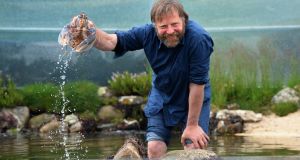 The problem of plastic waste polluting the oceans is highlighted in an underwater garden installation at Bloom in the Park 2019, which opens on Thursday.

A 30,000 litre truck made two trips to the west coast to collect water for the Bord Iascaigh Mhara’s giant rockpool.

And the marine garden was framed with plastic items that have been washed up on Irish shores.

One of the garden’s designers, Oliver Shurmann, who has presented work at Bloom every year since its inception 13 years ago, said this garden was his most challenging to date.

“I thought this would be a simple operation, but it certainly wasn’t,” Mr Shurmann said. “You are working with live animals and the sea water is alive too; it’s full of plankton.”

The rockpool is intended to highlight “something incredibly valuable, clean and undisturbed”, he added.

Suspended above the underwater garden are fishing nets, representing the role fishing men and women play in reducing plastic in the oceans.

Bord Iascaigh Mhara encourages Ireland’s fishing trawlers to deposit ocean waste they collect in their nets at one of 12 ports in which the organisation is currently operating.

More than 330 tonnes of marine waste have been collected through this voluntary Fishing for Litter scheme.

Entitled Stolen Land, it aims to show a connection between the Irish and Guatemalan people, with the trauma of eviction having featured in both communities’ histories.

In the Central American section, there is a Mayan art statue of Maria, a Guatemalan girl who featured on this year’s Trócaire box.

In the Irish portion of the garden is a thatched cottage with 1847 inscribed on the wall.

Cavan-based Kavanagh said he felt particularly connected to the issue of land destruction as an environmentalist.

Referring to Ireland and Guatemala, he said: “There is not much difference between our dark past and their dark present.

“This year it is about land and environmental affairs. The environment is part of who I am so I immediately was interested by the brief.”

While environmentalism played a big part in this year’s collection, other gardens showed the sensory benefits of horticulture for people with mental health illnesses or dementia.

Bloom 2019 will showcase 22 miniature gardens over the Bank Holiday weekend.