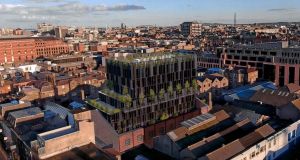 Cathedral Leisure Limited wants to construct the 28m hotel in the centre of the old red-brick industrial bakery, built in the mid-1860s. Photograph: ODOS Architects

Plans to transform the Victorian Boland’s bakery and biscuit factory off Dublin’s Capel Street into an eight-storey 98-bedroom hotel have been submitted to Dublin City Council.

Cathedral Leisure Limited wants to construct the 28m hotel in the centre of the old red-brick industrial bakery, built in the mid-1860s, with lower-rise elements in the surrounding buildings, parts of which date from the early 1700s.

The scheme will include an entrance from 133 Capel Street, which was part of the original ornate Boland’s bakery shop designed for the expanding business by prominent Dublin architect Charles Geoghegan in 1865.

The former bakery and biscuit factory buildings occupy almost one-third of a city block between Capel Street and Dublin City Council’s Victorian fruit and vegetable market on Mary’s Lane. Spared from previous development largely due to their backlot location, the bakery buildings remain some of the best-preserved early industrial buildings in the city.

At 28m, the maximum height allowed in this part of the city, the hotel would be the tallest building on the block, and almost twice the height of most of the surrounding three- and four-storey buildings. It would, the developers said, give visitors unobstructed views across Dublin, but would also open up a previously largely unknown historical site to the public.

The Boland family had a bakery on Capel Street from about 1830, but the business underwent a programme of massive expansion in the 1860s when a new generation took over. Under the stewardship of Patrick Boland, the company first expanded on Capel Street with a three-storey bakery shop from 133 to 136 Capel Street, designed by Geoghegan, who also designed Findlater’s grocers on O’Connell Street. The shop backed onto a new large bakery and separate biscuit factory, and incorporated a Presbyterian meeting house, built in 1703 and still largely intact.

The whole complex was called the Metropolitan Bakery, and was completed in around 1866. Within the next decade Boland’s had built the City of Dublin Bakery at Grand Canal Quay and the Flour Mills on Ringsend Road, as well as the Model Bakery in Dún Laoghaire.

The businesses thrived over the next 50 years, but difficulties after the first World War, involving strikes and a glut of flour from British mills, led to the closure of the Capel Street bakery in 1926. The site was divided and sold off, although Boland’s retained offices on the upper floors of Capel Street for some years after.

While the Capel Street buildings have been on the Record of Protected Structures for several years, Dublin City Council last year decided to also list the adjoining factory buildings because of their historical and architectural merit.

We are passionate about bringing unused and unloved buildings back to life and creating new, high-quality public spaces

Cathedral Leisure is part of the Beannchor Group, one of Northern Ireland’s largest hotel operators, which owns the five-star Merchant Hotel in Belfast developed from the former Ulster Bank Headquarters.

A spokeswoman for Beannchor Group said it had a long history in the redevelopment of historic buildings.

“We are passionate about bringing unused and unloved buildings back to life and creating new, high-quality public spaces and amenities that bring about positive regeneration. This proposed development, we believe, will add greatly to the fabric of the Capel Street area, which is an area of great authenticity, with a great sense of community in the heart of Dublin city.”

True History of the Kelly Gang: How an Irish bandit became Australian antihero
10