Jesuits gift Dublin buildings to be converted to social housing 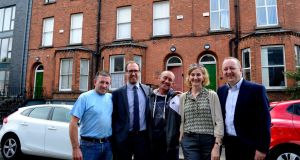 Three large Victorian buildings in Dublin’s north inner city, which have housed the Pioneer Association, the Jesuit Centre for Faith and Justice and the first premises of Peter McVerry Trust, are to be turned into homes for people leaving emergency accommodation.

The Jesuit order, which owns 26, 27 and 28 Sherrard Street Upper, just off Gardiner Street, has agreed to sign all three buildings over to the Peter McVerry Trust, subject to the approval of the Charities Regulator, for use as social housing.

The terrace of three-storey over-basement houses, which date from about 1880, were built as homes but have been in institutional use for most of the past century. No 27 was the headquarters of the Pioneer Total Abstinence Association, since 1944, until its recent move to smaller premises in Marino. No 26 and No 28 housed various Jesuit organisations. The basement of No 26 was used by Fr Peter McVerry as a drop-in centre for homeless young people for more than 30 years.

While this will go just a small way to addressing the crisis, we will be able to provide accommodation for a mix of people who are most in need

All the buildings, apart from 28, which still houses some of the trust’s administrative offices, are now vacant. Once approval is secured from the charities regulator, the trust plans to convert them into 16 apartments.

“The pressing need for housing, particularly social housing, is on the front page of the papers most days of the week,” trust chief executive Pat Doyle said. “While this will go just a small way to addressing the crisis, we will be able to provide accommodation for a mix of people who are most in need.”

Two of the apartments will be set aside for young people leaving care, two will go to people “straight from the streets”, Mr Doyle said, while the rest will be a mix of singles, couples and possibly small families living in hostel or other emergency accommodation.

“This will take them out of homelessness for good. They will be tenants and the label of homelessness will be removed from them. I’m delighted that the Jesuit Community of Ireland see this as a very apt and fitting legacy for these properties.”

The trust will get the buildings free of charge but expects to spend in the region of €1.6 million on conversion and renovation works. “The buildings have been valued at about €3 million, so its a hugely generous gift from the Jesuits,” Mr Doyle said.

While the buildings have been continuously occupied and are in relatively good condition, with many intact original features including fireplaces, and ornate cornicing and ceiling roses, their conversion into apartments will require substantial work. However, Mr Doyle said the trust had long experience in dealing with the reuse of older buildings. “We will go up any cul-de-sac if there’s even a half chance of a home at the end of it.”

The trust intends to seek planning permission later this year with a view to completing work before Christmas 2019. Later this month the trust will hold a week-long exhibition at the Irish Architecture Foundation on Bachelors Walk, showcasing its work in reusing buildings.