D4 homes and embassy to forfeit garden land over BusConnects

Map ‘anomalies’ mean some embassies protected while others not, claims FG councillor

A number of inconsistencies have been discovered in the preferred route for BusConnects between UCD and the City Centre. Video: Enda O'Dowd 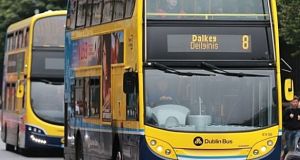 A spokeswoman for the NTA said: ‘If widening of the road is required we would seek for this to occur by agreement between the NTA and the parties involved.’ Photograph: The Irish Times

Parts of gardens of some of Dublin’s most expensive properties, including embassy lands, are set to be acquired as part of the National Transport Authority’s (NTA) BusConnects plan.

The core bus corridor route from the city centre to UCD proposes the removal of 94 on-street parking spaces, 160 trees, some more than 100 years old, and parts of 67 properties across Ballsbridge and Donnybrook to allow for road widening.

Fine Gael Cllr Paddy McCartan believes the NTA has not adequately assessed the route and said he has identified “anomalies” with the maps produced as part of the public consultation process.

“I have walked the entire route with the NTA map and it does not add up.”

Mr McCartan references a proposal to acquire parts of the front gardens of four houses on Merrion Road leading up to the Dutch embassy, but not any of the embassy, despite it having the same boundary line.

“There is a clear inconsistency at the Dutch embassy. Effectively there would be a bus and cycle lane running where gardens are now, and then stopping abruptly when it meets the embassy wall. I can see why, in that it would be difficult, and maybe impossible to compulsorily purchase embassy lands, but it makes no sense.”

However he said, the map indicates part of the United Arab Emirates (UAE) embassy on Pembroke Road is proposed for acquisition.

“The difference is the Dutch embassy is marked on the Ordinance Survey map the NTA used, but the UAE isn’t. It indicates to me that this was just a desktop exercise and no one actually went out and walked the route.”

There were also major road changes, that would have a significant impact on Ballsbridge traffic, the significance of which seemed under-appreciated, he said.

“Elgin Road at the side of the American embassy is being closed as a through road and turned into a quasi cul de sac. I can’t quite see the logic in that.”

The maps also gave no indication of how much of people’s gardens were proposed for acquisition, he said.

“It could be 5m it could be 7m. The only way to do it is to look at the existing road and try to judge how much wider it would have to be to accommodate two more traffic lanes and two cycle lanes.”

What do residents think?

Pierce and Freda Meagher who live next door to the Dutch embassy said it “appears about 12ft ” of their garden would be required.

“It seems odd that they won’t be touching the embassy, but they could take up to 12ft of our garden – that’s a phenomenal amount of space – then what happens? The bus just stops at the embassy wall?” said Mrs Meagher.

Mr Meagher said he was not opposed to improving bus service. “We do use the bus and I cycle”, but he said he hoped any land acquisition would be minor.

“You don’t defeat something like this, there has to be compromise. I would like the chance to negotiate, but they don’t tell us how much they want to take.”

Hilary Hough lives on Nutley Lane and part of his garden has been earmarked for acquisition, but he is primarily concerned about the changes proposed to the roadway.

“They are proposing to convert a two-lane road into a six lane highway it will totally destroy the lane. The traffic is is already constant . With a car lane, a bus lane and a cycle lane on both sides it’s going to make it virtually impossible for people to exit their houses.”

A spokeswoman for the NTA said: “If widening of the road is required we would seek for this to occur by agreement between the NTA and the parties involved.”

In relation to the issue at the Dutch embassy she said there was “sufficient width to accommodate the layout required”.

The UAE embassy did not respond to queries from The Irish Times.