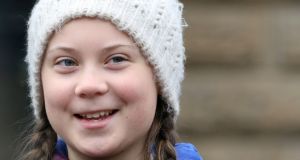 Lord Mayor of Dublin Nial Ring has rejected a proposal to confer the Freedom of the City of Dublin on Swedish teenage environmentalist Greta Thunberg.

Solidarity city councillor Michael O’Brien had asked Mr Ring to consider granting Dublin’s highest honour to the 16-year-old activist ahead of Friday’s global school student protests calling for climate action. On Thursday, the founder of the Youth Strike for Climate movement was nominated for a Nobel peace prize.

In a letter to Mr Ring, Mr O’Brien said honouring Ms Thunberg would recognise “a movement and a generation that, if equipped with the right ideas and policies, are our best hope to save the planet”.

However, Mr Ring told The Irish Times he would not be accepting the proposal.

“The Freedom of the City is generally given to people who have done something for, or have a singular connection with, Dublin or Ireland,” he said.

Mr Ring said he did not propose to grant the honour to any individual before his term as Lord Mayor ends this summer.

“If every Lord Mayor is searching around for someone to give it to, I think that devalues it. It should be something exceptional. There are lots of people you could make the argument for, but I don’t think there’s been one ‘standout’ person this year.”

Cllr O’Brien pointed out the Freedom of the City had previously been awarded to Nelson Mandela and Aung San Suu Kyi and that neither had any particular association with Dublin. Ms Suu Kyi was, in December 2017, stripped of the honour because of the repression Myanmar’s Rohingya Muslims. No one has since been awarded the freedom of Dublin.

The council had in 2017 agreed to a proposal by the then lord mayor Brendan Carr to award the Freedom of the City to former US president Barack Obama and his wife Michelle Obama. However, the award was never given.