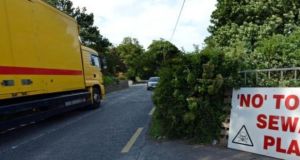 More than 34,000 submissions were made in relation to the development of a new regional sewage plant for Dublin – most of which were objections to the location of the facility, Irish Water has told an An Bord Pleanála hearing.

Irish Water is seeking permission from the board for a €500 million sewage plant at Clonshaugh east of Dublin Airport, which would be the second-largest sewage works in the State after the Ringsend plant in Dublin 4.

The plant, which would process the waste of 500,000 people across the greater Dublin area, is “vital” to safeguard public health, protect the environment, and facilitate future development, Irish Water has said.

Communication consultant Dan O’Boyle, representing Irish Water, acknowledged there had been significant opposition to the project during public consultation, but said this had resulted in “significant actions and enhancements” to the project.

A “buffer zone” around “odour producing units” had been increased from 100m to 300m and treatment tanks would now be fully covered which would have “significant benefits in terms of odour management” Mr O’Boyle said.

There had also been changes to pipeline routes and construction methodology. However, most significantly Irish Water has recently decided to apply an additional treatment process to the effluent from the plant, before it is discharged into Dublin Bay.

The project includes the construction of an underground orbital sewer from Blanchardstown to Clonshaugh, to intercept existing flows to Ringsend; a pumping station at Abbotstown; and an outfall pipeline to discharge effluent into the Irish Sea approximately 1km north east of Ireland’s Eye.

Environmentalists and residents claimed the effluent would not be treated to the same standard as at the Ringsend plant.

Project manager for the new facility Ciarán O’Keeffe told the hearing while the proposal would have a “negligible impact” on the quality of coastal waters, in response to concerns, including those raised by Fingal County Council in relation to “ecoli concentrations in the treated effluent” ultraviolet disinfectant treatment would be applied.

“Irish Water has determined that it will apply UV treatment to all effluent discharges,” My O’Keeffe said “as an abundance of caution”.

At the opening of the hearing yesterday Irish Water’s head of asset management Sean Laffey said the new plant was essential to divert “wastewater load” away from the Ringsend sewage works.

There was already “significant overloading of sewers, deficiencies at combined sewer outflows and increased risk of sewer flooding throughout the network” he said.

The Ringsend and the Leixlip sewage plants, even with upgrades, would reach a “capacity deficit” by the 2025 Mr Laffey said and “further expansion of Ringsend and Leixlip waste water treatment plants beyond their ultimate design capacity is not possible”.

The proposed new plant would provide the additional capacity required once the Ringsend works had reached its limits.

“The new regional plant is required to divert load away from the Ringsend facility, alleviate pressure on the wastewater network and support the long-term sustainable growth of the wider Dublin region,” he said.

“Irish Water firmly believes that the proposed project is the optimum solution from a technical, environmental, social and economic perspective, to meeting Dublin’s wastewater treatment requirements.”

More than 100 people, most of them local residents and environmental groups opposing the plan, attended the opening of the hearing. Individual residents and groups will next week set out their objections to the facility which they said will jeopardise the health of people, wildlife and plants, and will increase pollution in Dublin Bay.

The hearing is expected to continue for two weeks.