Dún Laoghaire baths contractor to clear plastic from nearby beaches 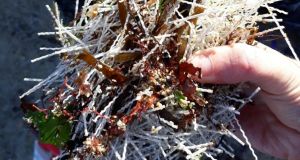 The company contracted to redevelop the Dún Laoghaire baths site is to arrange a cleanup operation after thousands of pieces of plastic were found washed up on nearby beaches.

Residents of Sandycove in south county Dublin made the discovery of the toothpick-sized strips of material that had become entangled in sand and seaweed.

On Friday evening, Dún Laoghaire-Rathdown County Council said the main contractors on the baths project, the SIAC/Mantovani Group, had updated it “on their planned cleanup of the affected areas over this weekend”.

In a statement to The Irish Times, SIAC said “a quantity of fibres were washed out from a recent concrete pour”. The concrete is placed on the sea bed at low tide to form the foundations for pier works.

“Our teams have been tasked to investigate why this may have happened, but in the interim the key task is now to commence a clean-up,” Martin Maher, chief executive of SIAC, said. At least 30 operatives would be on site over the weekend, he said.

Residents were concerned, particularly when the scale of the problem became clear following early efforts to remedy it on Friday morning.

“The enormity of it hits you when you start collecting. You are there for hours and you feel like nothing is done. I think you need some sort of expert machinery, ” said Cerstin Mudiwa, who has lived in the area for more than 10 years and was at the beach on Friday.

Images of the plastic pieces show tiny lengths of thin, flexible material about the length of a little finger. They had become embedded in rocks and enmeshed in sand.

Locals now fear for their potential effects on wildlife, although it is understood they float in water making them far easier to gather than notorious microfibres.

Gráinne Grehan, a resident who came across the objects while walking on the beach, said while they were not immediately conspicuous, “once you put your eye in you could see there were hundreds of thousands of them”.

Pulling a large handful of the material from a small piece of seaweed in a video posted to Facebook, the girl observed: “I don’t know exactly what this is but it’s not good for the environment.”

Council officials were quickly contacted and later arrived to inspect the material that had washed up. In an early statement it said it had “received complaints of an incident of plastic pollution along the coast at Dún Laoghaire between the west pier and the Forty Foot”.

“While the plastic is not believed to pose a chemical risk, it may be a nuisance to swimmers. Caution should be taken.”

It later stated that following a meeting with SIAC, an organised cleanup was to proceed over the weekend. It is understood company workers will be supported by council staff and members of the public.

Last April a €9 million contract for the baths project was signed between the council and the SIAC/Mantovani construction group. It is expected to be open to the public in the spring of 2020.