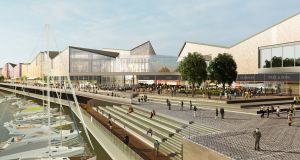 Waterford City and County Council has signed a contract for a €300 million development with a Saudi Arabian retail group, for a long-mooted project on the city North Quays.

Local councillors on Friday voiced support for the deal with the Saudi Arabian firm amid international controversy over the brutal killing of journalist Jamal Khashoggi in the Saudi Arabian consulate in Istanbul last month.

On Friday the local authority announced an agreement had been signed with the European arm of Saudi retail giant Fawaz Alhokair Group, which will redevelop the North Quays site in the city.

An Bord Pleanála also approved compulsory purchase orders for lands required for the redevelopment project. The redevelopment of the brownfield site will include a shopping centre, office space, a hotel, and other commercial facilities, totalling over 90,000 square metres.

The Saudi retail group intend to submit a planning permission application early next year for the large scale project, according to the local authority. The council said the investment would create more than 2,300 direct jobs.

Responding to questions on the agreement, given the controversy surrounding the murder of Khashoggi, a spokeswoman for the council said the local authority had been involved “in a two-year process” to reach the deal.

Delivering the project would be “a major game changer and future growth enabler for the region”, the local authority said.

Deputy mayor and Fianna Fáil councillor John O’Leary said the issue was “quite separate” to the international controversy over Khashoggi’s killing. “Business and trade is separate . . . I think the economy still keeps on the move,” he said. The redevelopment project was a “big investment” for the city, he said.

Council mayor Declan Doocey (FG) said the riverside site had been “stagnant for years,” and “we are so fortunate to have these people invest in our country”.

Similarly, Sinn Féin councillor Declan Clune said it was a “stretch” to link Saudi business firms with the actions of the Saudi government.

“I can’t make the link, they can’t control the government,” he said. If there was some controversy directly relating to the business group it would be a different matter, he said. “Obviously everyone would condemn what happened to that journalist,” he added.

Progress on the development was welcomed by Gerald Hurley, chief executive of Waterford Chamber. “This is fantastic news for Waterford and perfect timing,” he said.

The agreement on the long awaited project was a “catalyst for change” for the city, and would help make Waterford “a better place to live, work and do business”, Mr Hurley said.