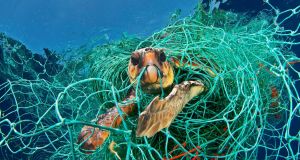 A Loggerhead turtle trapped in a drifting net in the Mediterranean: a World Wildlife Fund report calls for “a new global deal for nature and people” similar to the 2015 Paris Agreement on climate change. Photograph: Jordi Chias/WWF/PA

Wildlife populations around the world have fallen by an average of 60 per cent over the last 40 years, according to a study of thousands of vertebrate species.

The report by the Royal Zoological Society of London for the World Wildlife Fund (WWF) said human consumption was the biggest culprit for the massive global loss of biodiversity.

Rising food production and increased demand for energy, land and water has left only a quarter of the world’s land area free of human activity, according to the report. Plastic pollution affects even the deepest parts of the world’s oceans and chemical pollution threatens half the world’s killer whale population.

“The evidence becomes stronger every day that humanity’s survival depends on our natural systems, yet we continue to destroy the health of nature at an alarming rate. It’s clear that efforts to stem the loss of biodiversity have not worked and business as usual will amount to, at best, a continued, managed decline,” the report says.

Among the hardest-hit wildlife populations are elephants in Tanzania, which are down by 60 per cent since 2009; grey parrots in Ghana, down by 98 per cent since 1992; and Borneo’s orangutan population, which has halved in a decade and a half.

Agriculture, land conversion and over-exploitation of species are the main drivers in the decline of wildlife populations, which is apparent everywhere but is especially severe in certain parts of the world.

“Species population declines are especially pronounced in the tropics, with South and Central America suffering the most dramatic decline, an 89 per cent loss compared to 1970. Freshwater species numbers have also declined dramatically, with the Freshwater Index showing an 83 per cent decline since 1970,” the report says.

The report calls for “a new global deal for nature and people” similar to the 2015 Paris Agreement on climate change that saw the international community promise to reduce greenhouse gas emissions.

“We, along with conservation and science colleagues around the world, are calling for the most ambitious international agreement yet – a new global deal for nature and people – to bend the curve of biodiversity loss. Decision-makers at every level, from individuals to communities, countries and companies need to make the right political, financial and consumer choices to realise the vision that humanity and nature can thrive. This vision is possible with strong leadership from us all,” it says.

Mike Barrett, executive director of science and conservation at WWF, said the report showed the current pattern of consumption was not only destroying nature but threatening humankind itself.

“We are sleepwalking towards the edge of a cliff. If there was a 60 per cent decline in the human population, that would be equivalent to emptying North America, South America, Africa, Europe, China and Oceania. That is the scale of what we have done,” he told the Guardian.

“This is far more than just being about losing the wonders of nature, desperately sad though that is. This is actually now jeopardising the future of people. Nature is not a ‘nice to have’ – it is our life-support system.”