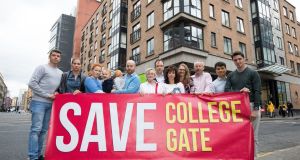 Residents of College Gate Apartments on Townsend Street: it is not known what solution has been found for the apartments and pool set for demolition. Photograph: Tom Honan

The development of the Dublin Metrolink rail line is facing delays following a decision not to publish the revised route of the line until next year, almost a year since it the original alignment was unveiled.

It is understood the line redesign will involve an extension of the underground section past Ranelagh in south Dublin, and is likely to add more than €100 million to the cost of the €3 billion line.

Transport authorities had been due to announce the redesigned route of the line last August, but postponed their decision, and had been expected to publish the route details by November.

However, Transport Infrastructure Ireland (TII) and the National Transport Authority (NTA) have confirmed that, due to the “complexities” involved and a “high volume of submissions” from the public. they will not be in a position to finalise the route until next year.

The preferred route of the metro line which combines the previously planned Metro North from Swords to the city centre with an upgrade of the Luas Green line between Charlemont and Sandyford, was announced last March.

However in the subsequent months the transport authorities came under pressure from senior politicians including Taoiseach Leo Varadkar and Minister for Housing Eoghan Murphy, and the GAA to alter the route.

The route had involved the use of Na Fianna GAA club and adjoining school pitches on Mobhi Road in Glasnevin for a major construction site. Mr Varadkar last May said the proposals would cause “enormous damage” to the schools and sports clubs that use the Glasnevin lands.

It had also required the closure of a road linking Rathmines and Ranelagh in south Dublin. Mr Murphy asked the transport bodies to scrap plans to close the level crossing from Dunville Avenue to Beechwood Road in Ranelagh, which would force motorists into a 1.2km detour.

A public swimming pool and a block of 70 apartments were also scheduled for demolition. Local politicians and residents have appealed for the Markievicz Leisure Centre and College Gate apartments on Townsend Street not to be demolished.

The transport authorities had prepared two solutions for the Dunville Avenue crossing; one involved the construction of a rail bridge over the road, the other would see the construction of a railway “cutting” allowing the train to travel under the road. These options would have added in the region of €25-€35 million to the line’s €3 billion budget.

However, these options were not acceptable locally, and it is understood the authorities are planning to extend the tunnel, which was due to end at the current Luas Charlemont stop north of Ranelagh, south, past the Dunville Avenue stop.

It is also understood that lands belonging to Home Farm Football Club will be used instead of the GAA lands. However, it is not known what solution has been found for the Townsend Street apartments and pool.

More than 7,000 submissions were received during the public consultation process on the original alignment. A spokesman for TII said it hoped to hold a second round of consultation on the revised route “early in the new year”. The Metro line is due to open in 2027.