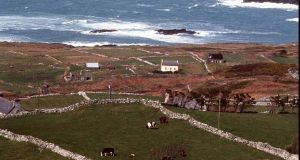 A tiny island off the southernmost tip of Ireland is set to become the location for the first ever official pilot of fully electric public buses.

And the challenging topography of Cape Clear, lying just 13 kilometres off west Cork, is why such an unlikely test site has been selected.

“If we can do it there, we can do it anywhere,” explained a National Transport Authority spokesman of the plans to introduce electric buses to the 5km long island and its 147 inhabitants.

“It’s hilly,” he said. “We have to make sure that whatever vehicles are put in place can negotiate windy roads and steep hills.”

Two electric buses – holding a maximum of eight and 22 passengers apiece - will be handed over to Comharchumann Chléire Teoranta (CCT) which runs the existing island service.

If successful, the electric buses could be set to gradually replace others in the authority’s Local Link rural transport programme, a community run scheme operated outside urban areas. As many as 200 such buses are currently in service.

According to the authority, each vehicle piloted on Cape Clear must be capable of a full day’s work from one slow-charging cycle of the traction batteries held onboard, ideally without any further charging necessary during the day.

Conventional diesel-powered buses are currently used to ferry the island inhabitants around but these are now about 10 years old. Their age, the nature of the landscape and the highly saline environment “have all taken their toll on the vehicles and they now require replacement”, the authority said.

Whoever successfully bids to supply CCT with the fleet following a public tender period will also have to install charging points on the Island.

Cape Clear measures just five kilometres by three. Its small size was exemplified during the summer when the local 150-year-old school was reported to be having difficulty securing a teacher for its six pupils.

Popular with tourists, the numerous historical attractions include 14th century castle ruins and the nearby Fastnet Rock lighthouse. These may soon be bolstered by the emergence of Ireland’s first electric bus fleet.