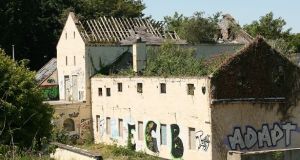 The site of the Old Mill in Julianstown, Co Meath: council declared it derelict in 2008 but did not place it on the derelict sites register

Meath County Council has confirmed it will finally take steps to force the owners of a site on which a long-derelict hotel stands to take action to address its ruinous condition, or else it will place it on the derelict sites register within months.

The council had been threatened with legal action by a company in Julianstown for its failure to put the site of the Old Mill Hotel on the derelict sites register, despite having declared it derelict in 2008.

Residents have been complaining to the council and public representatives about the site since the hotel closed down 10 years ago.

The site, and an adjacent 18th century mill house are protected structures and Julianstown in east Meath is an architectural conservation area. Local people had complained of dumping in the area and that the condition of it was a health hazard.

The council had been given until this Friday to respond to the legal threat.

It wrote to the company’s solicitors on Monday to say it had received a structural engineers’ report following a detailed survey of the buildings on the site.

The report identified various structural issues to be addressed including the demolition of certain buildings.

The council said discussions were taking place with the conservation officer as to how such a demolition could be carried out by the owners in light of the fact that the building is a protected structure.

Subject to clarification on the issue, the council said it would serve a notice on the owners under section 11 of the Derelict Sites Act within the next two weeks, affording the owners a “reasonable period of time not greater than 12 weeks to comply and failing which, the process for entering the property in the register in accordance with section 8 will be immediately commenced”.

The local residents’ association established from council minutes that about 400 sites in Meath are derelict yet less than a dozen are listed on the derelict sites register.

The council told The Irish Times that due to resource constraints and the significant increase in the number of properties falling into disrepair during the economic downturn it was not in a position to have as many properties restored to a non-derelict state it would like.

“It will be appreciated that full implementation of the derelict sites legislation has been made all the more difficult during the economic downturn and particularly due to the lack of funding for property owners to take measures to ensure properties are made non-derelict, as well as properties being under the control of Nama, in liquidation or difficulties in tracing registered owners,” it said.

The council suggested such difficulties had been recognised in the Government policy document Re-building Ireland – Action Plan for Housing and Homelessness, which provides a specific commitment to review the Derelict Sites Act.

“Notwithstanding the aforementioned practical difficulties and the resource constraints, the council will use the full provisions of the derelict sites legislation where it is considered that this will serve to expedite realisation of the aforementioned objective however it will also be appreciated that placing a property such as the Old Mill on the derelict sites register may not in itself serve to expedite restoration of the property.”

The council confirmed it had responded to the letter from solicitor Fred Logue, confirming its commitment to “having measures taken by the owners of the site to ensure that it no longer remains in a ruinous, derelict or dangerous condition”.

It said its efforts to have this objective secured through negotiation with the owners of the property “have not been successful”.

Mr Logue said he cautiously welcomed the fact that nine years after declaring the Old Mill site to be derelict, the council had finally accepted that it should be entered on the register of derelict sites.

“My client will be monitoring progress closely to ensure that the local authority follows through on this commitment and to ensure that it uses all the measures available to it to bring the dereliction of the site to an end,” he said.

Mr Logue said his client was baffled as to why the council would be so reluctant to list this site on the register given that there was no cost involved and the clear legal obligation on the council to do so.

The register was important since it was “the primary means by which the public can identify derelict sites and be informed about actions that local authorities are taking”.

“The public shouldn’t have to resort to threats of litigation to access information that should be put into the public domain as a matter of course by public authorities such as Meath County Council.”