Gull control approved in Dublin despite no evidence of threat

Documents reveal extent of lobbying over gulls in North Dublin

"We don't really agree with what they are doing. Seagulls are on the red list, so they are endangered," says Kirsty Burns, one of three students at Loreto Secondary School in Balbriggan whose study of seagull behaviour has appeared at the Young Scientist Exhibition. 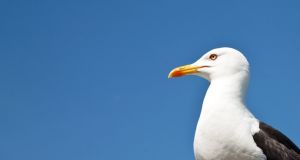 Gull numbers have declined because of human behaviour, but people complain the birds are a nuisance in urban areas. Photograph: Getty Images

North Dublin politicians pressed Minister for Regional Affairs Heather Humphreys to allow the removal of the nests of protected gulls in Howth, Co Dublin, after similar measures were granted in Balbriggan.

The decision followed a concerted campaign involving more than 50 letters to Ms Humphreys’s department from a Balbriggan community group that complained that gulls had become a nuisance and posed a health risk to residents because of bacteria carried by the birds.

When Ms Humphreys approved the scheme, she said the reason was because of a “threat to public safety”, despite a lack of evidence that such a threat exists.

In December last year the Wildlife Licensing Unit of the Department of Regional Affairs asked the Health Service Executive whether the gull situation in north Dublin could be considered a public health issue.

Documents released under the Freedom of Information Act show the HSE replied saying gulls do not appear to transmit harmful bacteria and viruses to humans in any meaningful amount. “There is little evidence that these birds constitute a significant infectious disease risk to humans.”

However, the decision to approve the scheme in Balbriggan prompted a flurry of requests from politicians seeking something similar for Howth.

Minister for Education Richard Bruton wrote to Ms Humphreys saying several people had contacted him about gulls. He asked her to advise him “what was done in Balbriggan and what were the criteria for securing a derogation”.

Fianna Fáil TD Seán Haughey also contacted her office, saying measures have been taken against gulls in Balbriggan “and the residents of Howth would like similar actions taken in their locality”.

He attached some correspondence in which a constituent claimed to have witnessed a gull “swoop and take a chip from a baby’s mouth”.

A member of staff for Fianna Fáil Senator Lorraine Clifford-Lee wrote to Ms Humphreys’s office seeking a copy of the “recently announced policy regarding the issue of seagulls in Balbriggan”.

Finian McGrath also wrote to Ms Humphreys’s office, asking: “Can you advise as to what action you intend to take over the seagull problem in Howth. It has been noted that you have taken action in the Balbriggan area and my Howth constituents are wondering whether you plan on carrying out similar action in the Howth area.”

Fianna Fáil TD Darragh O’Brien wrote to Ms Humphreys and attached a letter from a constituent who asked, among other things, about what will be done about the “explosion” of gulls in urban areas.

The Irish gull population has declined by about 90 per cent in recent decades because of loss of habitat and overfishing in Irish waters. As landfills closed, many gulls migrated into towns to scavenge food waste left out or littered by humans.