The regurgitated pink stuff: what was in it? Readers’ nature queries 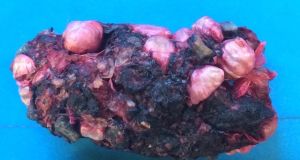 We have found the regurgitated stuff mentioned in Eye on Nature on July 1st. It can range in colour from pink to light purple. We dissected it and found a mixture of pulp and seeds regurgitated by our jackdaws and rooks. The seeds germinated and produced little ivy plants.
Ulli Peiler
Ballymote, Co Sligo

The pulp of ivy seeds is purple.

For the first time buzzards have nested in the top of an ash tree in a woodland in Co Meath. This photograph taken by neighbour shows the chick almost fully fledged.
Clive R Symons
Macetown, Co Meath

I saw the plant in my photograph on a stone wall inside the monastic cashel on Inishmurray, off Co Sligo.
Eamon McPartland
Grange, Co Sligo

The plant is navelwort, which grows on old walls, on cliffs and in rocky places.

Can you identify the insect that I found on a lily plant? It was about 1cm long.
John Derby
Cashel, Co Tipperary

It is the red lily leaf beetle, from looking at the photograph you sent.

My grandson found the whelk shell in the photograph I’m sending you at Laytown beach, Co Meath. It is about 12cm long and 1-1.5mm thick. How big can these animals be?
Fred Fitzsimons
Carrickmacross, Co Monaghan

Common whelk shells can normally reach 11cm, so yours is particularly large. Whelks grow their shells around a central axis as they get bigger, adding new material from the mantle at the aperture. Scientists have found that the shell thickens most when the whelks are subject to predator pressure from crabs, lobsters and starfish.