First half of 2017 was world’s second hottest on record 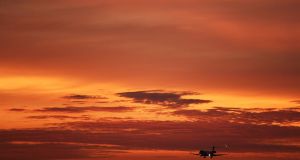 Rising temperatures due to global warming will make it harder for aircraft to take off in coming decades, a US study warned. Photograph: Jewel Samad/AFP/Getty Images

The first half of 2017 was the second warmest on record for Earth, behind only last year.

The National Oceanic and Atmospheric Administration announced that Earth’s average temperature from January to June was 14.4 degrees , which is 0.9 degrees warmer than the 20th century average.

She said that is the result of the world changing in a warming climate.

Record warmth was measured in much of Mexico, western Europe, eastern Russia, eastern Africa and eastern China. The US had its second warmest start.

Globally, June was the third warmest on record in records going back to 1880.