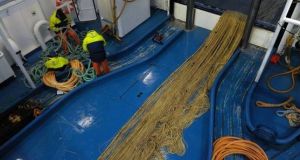 Some 14 per cent of work permit breaches on fishing vessels related to ‘working without permission’. Photograph: Getty

Almost 200 breaches of work permits on fishing boats have been identified over the past 18 months by the Workplace Relations Commission (WRC).

In a report published on Thursday the WRC said five prosecutions were initiated where “compliance by other means was not secured”.

The report was based on inspections of crew working on fishing vessels over 15 metres in length. These monitored the Government’s “Atypical” worker permission scheme for non-European Economic Area (EEA) crew.

The State had issued some 200 “Atypical” permits to the end of June this year, under a scheme introduced by former marine minister Simon Coveney after a report in The Guardian newspaper in 2015 which alleged there were abuses of worker rights in the sector.

The WRC report found 36 per cent of breaches related to failure to produce or keep records, while 20 per cent related to leave, public holiday and Sunday entitlements.

Some 14 per cent of breaches related to working without permission and 13 per cent involved failure to issue payslips, the WRC said.

The agency has conducted 208 inspections on 150 of the 176 whitefish vessels over 15 metres in length working in these waters, and intends to inspect the remaining 26 vessels by the end of this summer.

It says it has engaged with industry stakeholders on “enhanced compliance”, and has trained ten WRC inspectors at the State’s National Fisheries Training College .

Both the International Transport Workers’ Federation and the Migrant Rights Centre of Ireland have stated that the “Atypical” permits scheme is not working.

At a recent Oireachas committee on job, enterprise and innovation hearing, the MRCI aid 33 per cent of migrant fishermen experience verbal and or physical abuse, 48 per cent did not feel safe at work and there was a lack of rest breaks, days off and safety equipment on vessels.

ITWF co-ordinator Ken Fleming said the scheme was “legitimising slavery”. The committee is due to invite in stakeholders for further questioning.

Commenting on the WRC report, WRC director general Oonagh Buckley said that “traditionally, WRC inspectors have not specifically targeted the fishing fleet, given that many of those engaged on fishing vessels are ‘share-fishers’ and, therefore, self-employed”.

“In addition, other agencies particularly the Department of Tourism, Transport and Sport (Marine Survey Office) and Health and Safety Authority inspectors play the key role in relation to the enforcement of rest break, maximum hours of work, health and safety and living/working conditions requirements,” she said.

“That is why effective co-operation on the ground and the sharing of information between the many agencies involved are key to successful outcomes from these multi-faceted enforcement efforts,” she said.

She noted many vessel owners engage with inspectors and respond satisfactorily. The WRC focus was on compliance in minimum wage, annual leave, public holiday, wage payment, terms of employment and record keeping requirements, and it would take action if necessary, she said.