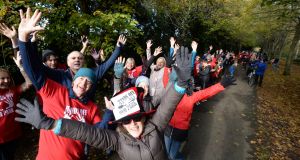 Dublin City Council has written to An Bord Pleanála to recommend that a proposed residential development for more than 650 apartments on former playing fields located beside St Anne’s Park in Raheny, Dublin, be turned down.

Locals have been opposing plans by developer Crevkav to build apartments on the land. The developer last year lodged a new planning application for the units in blocks rising to nine storeys in height.

The “I Love St Anne’s” campaign previously succeeded in stopping the development when planning approval for 536 houses and apartments on the land was overturned following a High Court challenge.

It led to An Bord Pleanála reversing its decision on the plan by Crevkav, a subsidiary of developer Pat Crean’s Marlet Group. It is taking a legal challenge over the refusal.

The proposed development has received a fresh blow after Dublin City Council chief executive Owen Keegan submitted a report to An Bord Pleanála with the recommendation that permission for the development be turned down.

“The proposed development is not considered to be consistent with the Dublin City Development Plan 2016-2022 and with the proper planning and sustainable development of the area,” said the report.

“The Planning Authority submits this report to An Bord Pleanala...and recommends that An Bord Pleanala refuse permission for the proposed development for the reasons and considerations outlined below.”

The report said the submitted Natura Impact Statement “has not demonstrated that the evidence given supports the assertion that no impact arises to the populations of protected Brent goose, black-tailed godwit or curlew of Dublin Bay”.

Furthermore, it added that it considered that the proposed development “would, therefore, materially contravene a development objective G123 indicated in the Dublin City Development Plan 2016-2022 for the protection of European sites”.

The land was formerly owned by the Vincentian Fathers, who are the trustees of St Paul’s College.

It had once been part of the St Anne’s Estate, owned by the Guinness family, but was acquired by Dublin Corporation in the 1940s before the Vincentian Fathers bought it in the 1950s.