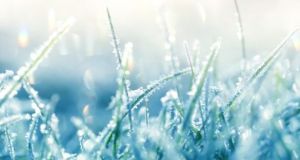 Temperatures may drop to as low as zero on Sunday night, with a risk of frost and ice across the country

Ireland is set for a cold snap with temperatures set to plunge and snow showers in parts early next week.

An unsettled and dreary weekend is forecast before a cold snap kicks in from the start of next week with some snow expected in the north and west over the weekend, Met Éireann has said.

There is a chance of snow and sleet showers over higher ground on Sunday, with highest temperatures of four to eight degrees expected.

Thursday has started out foggy in many area and this is expected to give way to cloudy and largely dry conditions in most areas, but with some small patches of rain and drizzle in others.

Thursday night is set to be foggy, heaviest in Leinster and Munster, and temperatures are expected to fall to three degrees.

Friday will be much the same, with heavy fog in the morning lifting during the day. The forecast is for a mostly dry and cloudy day, with some rain in the north and northwest.

Patchy rain is expected along the Atlantic coast at the weekend and these showers will become heavier by Saturday evening. The forecast for the rest of the country is for another dry and cloudy day, with highest temperatures of between seven and 10 degrees.

Met Éireann said Sunday would be a colder day, with scattered rain showers in the west. These may turn to sleet showers later with a risk of snow over higher ground in the west and north. There is also be a risk of thunder in areas along the Atlantic coast.

Temperatures may drop to as low as zero on Sunday night, with a risk of frost and ice across the country.

The cold conditions are forecast to continue into Monday and Tuesday. The outlook notes wintry showers and a risk of thunder in Connacht and west Ulster. Highest temperatures will be between three and seven degrees, with cold southwesterly winds expected on Tuesday. Temperatures will drop on Tuesday and very cold conditions will create a risk of frost and icy patches on roads.

The weather is forecast to become milder from the middle of the week but conditions will be unsettled.