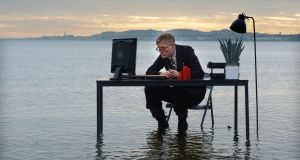 An alliance made up of a broad cross-section of Irish society has launched a campaign for faster and fairer climate action and underlined it is “a central priority for the electorate”.

It has set out nine demands for political parties including that they sign up to an 8 per cent reduction in greenhouse gas emissions each year – the current national target is less than 3 per cent – and ending support for new fossil fuel projects. It emphasises the need to support the rural economy “as farms reduce emissions and become more sustainable”.

It also underlines the need for “affordable and accessible public transport for all” and restoration of nature and wildlife. The group has printed 250,000 mini-pamphlets to target candidates.

In a manifesto, it states Ireland has been a laggard on climate action, indicated by “vague policy commitments and missed targets”.

The combination of campaigning civil society groups, the Citizens’ Assembly and the all-party committee on climate action had laid the ground for a step change, it added. “All of these bodies are simply asking Ireland to do its fair share. And it is in our vital national interest to do so.

To date governments had relied on taxes and subsidies to incentivise individual behaviour change, “rather than investment in low-carbon infrastructure and regulatory measures to deliver systematic decarbonisation throughout the economy”.

Those with lower disposable incomes and who suffer from other forms of social exclusion were hit harder by higher taxes. “Such households are less likely to be able to afford to invest in electric cars and solar panels, subsidies notwithstanding,” it notes.

Getting to “zero-climate pollution” would bring immediate benefits beyond reducing air pollution and traffic congestion to all parts of the country such as warmer homes, better accessibility with improved bus, train, cycling and walking infrastructure, “and opportunities to share in the ownership of the energy system that will power our future”.

Speaking on Wednesday at its launch in Sandymount, USI deputy president Michelle Byrne said it was supporting the campaign because “the climate emergency affects us now and we are the future”.

“It’s very difficult to lobby on any other issue if climate is not factored in,” she said. In getting thousands of student registered to vote in recent days, it was clear the climate crisis was among their top concerns.

Dr Rob Rutledge of Irish Doctors for the Environment said “as physicians we recognise climate change is the greatest threat to human life”.

“We want to impress on the in-coming government that the climate emergency needs to be at the forefront of any given policy,” he said. As it was, however, Fine Gael and Fianna Fáil were “planning to fail” on meeting critical 2030 targets.

Between livelihood issues and much discussion about environmental impact, it was “not easy for farmers” at present, so the right blend of supports were needed for the rural economy. “The solutions are there, but not the support structures,” she believed.

This was indicated by the absence of “proper agro-forestry schemes” that could help capture carbon more, or opportunities to embrace renewable energy production.

Voting under way in the Dáil to elect the next taoiseach 19:39
Court of Appeal increases sentences for high-end assault cases 19:34
Double marriage proposals for newly-commissioned army officers in Dublin Castle 19:16
Woman left in middle of nowhere after being raped by three Dublin teenagers, court told 18:56
Harris signs order to designate coronavirus as a notifiable disease 18:42