Cork ‘lagging behind’ on cycling infrastructure 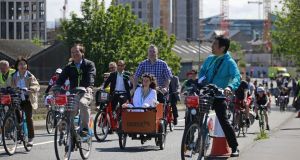 While the perception in Cork is that things are better in Dublin, cyclists in the capital continue to cite issues with poor infrastructure, limited funding and regular hostility from motorists. Photograph. Nick Bradshaw

“Cork was really ahead of the game in terms of cycling infrastructure,” says Dr Dean Venables, chairman of the Cork Cycling Campaign, as he recalls the introduction of segregated counterflow cycle lanes in the city about five years ago.

These “made a huge difference,” he says, “but since then there has been very little and the city council seem to be turning a blind end to continual and persistent abuse of cycle lanes.”

Venables, a UCC-based atmospheric chemist, believes Cork now lags behind other Irish cities in terms of cycling infrastructure. There are not enough places to lock bicycles and he regards people parking vehicles in cycle lanes as a problem. This led to just 241 fines being issued in the first 10 months of last year, and Venables believes enforcement is an issue.

“We contend that when a person parks in a cycle lane, not only is it a loss of revenue to the city, but it’s an act that endangers vulnerable road users,” he says.

A recent survey conducted by the cycling group found that fewer than 5 per cent of cyclists believe cycling infrastructure in Cork is fit for purpose, with nearly 75 per cent of respondents citing safety concerns as the biggest obstacle to cycling on a regular basis.

In spite of these issues, Venables is heartened by the rising number of cyclists in the city, and elsewhere, in recent years.

Cycling featurs in election manifestos, but the campaign believes there has been a lack of serious political dialogue about it on the election campaign trail, as it is not perceived as a vote getter.

“We an are apolitical group. We want all political parties to engage with us on this,” Venables says. “But it hasn’t really been emphasised.”

While the parties may not be saying a lot about cycling, Cork South Central Green Party candidate Cllr Lorna Bogue says constituents are exercised about the matter. Emails, calls and Twitter messages come in every day asking about related issues, she says.

“It’s getting increasingly difficult to believe that this government really cares about cycling, or anywhere outside of Dublin,” she says.

Bogue says a key part of combating the climate change crisis is getting people to cycle or use public transport instead of cars.

“How can we expect people to make this change if they can’t be sure of getting to work on time, or if they feel like they’re taking their life in their hands by just cycling down the road?” she asks.

While the perception in Cork is that things are better in Dublin, cyclists in the capital continue to cite issues with poor infrastructure, limited funding and regular hostility from motorists.

While this is more a plateau than a plummet, and with the figures for last year not yet available, it is still a cause for concern for Dublin City Council, which wants to double the numbers cycling by 2030.

Just 1 to 2 per cent of the Department of Transport’s capital spend goes on cycling, and cycling advocates say this needs to increase to 10 per cent - a level pledged by some political parties in their manifestos.

The Dublin Commuter Coalition has published its own manifesto, which puts the development of the Liffey Cycle route, planned since 2011, at its centre. The group also advocates for sustainable transport nationally and insists all new road projects “must include the provision for safe, segregated and continuous walking and cycling infrastructure”.

Green Party cycling spokesman Patrick Costello, who is seeking election in Dublin South Central, says cycling has to be made an attractive option for people of any age or ability.

“Dublin is flat city, we are drier than the Netherlands, warmer than Denmark, there is no reason that we don’t have similar number of cyclists except for the lack of decent infrastructure.”

“Improving and providing links from town and villages to near by greenways can help both improving existing infrastructure as well as creating new infrastructure.”

One prominent cycling advocate recently promised his vote to “anyone who can stop people using the Rathgar Road cycle lane as a left turn filter” .

A fellow campaigner responded that it would only take one bollard to force motorists take that turn legally. One bollard, one vote, sounds like a fair enough deal.