Border poll is not a red line for coalition, says Mary Lou McDonald 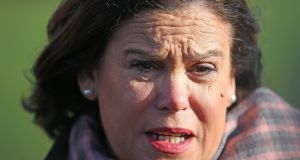 Sinn Féin leader Mary Lou McDonald: ‘No responsible incoming government can continue to bury its head in the sand.’ Photograph: Nick Bradshaw for The Irish Times

Sinn Féin leader Mary Lou McDonald has said she has not made a potential border poll for a united Ireland a red-line issue for future coalition talks.

“I have not posited the border poll and the preparations for it as a red line. I am saying something much more important and that is that no responsible incoming government can continue to bury its head in the sand. The preparations need to start,” she told Bryan Dobson on RTÉ television on Monday night.

Asked who would pay for a united Ireland given the €11 billion subvention given to Northern Ireland from the UK, she said “there will be have to be a negotiation with the British government”.

“They are not just going to walk off the pitch scot-free. Of course we are going to have to talk about money.

Anybody in ministerial office will seek and have advice, and I think that is the smart and wise thing to do

“I anticipate that we will have the assistance of the European Union, much as Germany did when it went through the reunification process, and yes, the British will have to take out the chequebook and put their hand in their pocket.”

Ms McDonald was also asked about evidence before the cash-for-ash inquiry in Belfast which heard that the then Sinn Féin minister for finance in Stormont, Máirtín Ó Muilleoir, asked permission from senior unelected figures linked to the party before cutting the costs of the controversial scheme.

“Anybody in ministerial office will seek and have advice, and I think that is the smart and wise thing to do. But ultimately the minister stands over their own decisions. At the time the scandal was of such magnitude that it was threatening the very existence of the powersharing institutions.”

Texts and emails in late January 2017 show that Mr Ó Muilleoir sought approval from senior republican Ted Howell, who was an IRA go-between in the 1990s and one of Gerry Adams’s closest advisers.

Ms McDonald said that Mr Howell was a “senior member of our negotiation team”. She said it was not an issue which was being raised with her by voters around the country.

In a wide-ranging interview, Ms McDonald was also tackled on the party’s proposals in relation the vacant sites levy and about the Sinn Féin position on the non-jury special criminal court.

Ms McDonald said that she wanted to see a “review” on the role of the court. She also defended the party’s proposal to raise €107 million through increasing the vacant site levy to 15 per cent. She said the proposal was fully costed despite the fact the tax only brought in €900,000 last year.