Save Our Hedgerows campaigners are demanding that all work ceases 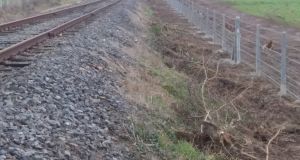 Hedgerow removal on the Limerick Junction to Waterford line. Irish Rail spokesman Barry Kenny said the work was in line with legislative requirements to erect new fencing, and confirmed replanting of native species would take place

Removal of hedgerows over stretches of the Limerick Junction to Waterford rail link has provoked outrage among environmental campaigners, who are demanding all work cease.

Save Our Hedgerows (SOH) is staging its third protest this week and has claimed hedges in place for more than 150 years are being removed and replaced by wires and cement pillars. They say it has taken an unacceptable toll on wildlife and is in contravention of the all-Ireland pollinator plan, which the company has endorsed.

Members of the group, including some landowners along the line, insisted “new fencing could be erected without hedgerow destruction” .

“All efforts should be made to minimise interference with hedgerows which are recognised as a vital haven for wildlife including songbirds, pollinating insects and a diverse range of threatened native plant species,” said SOH secretary Alan Moore.

Its spokesman, PJ O’Meara, expressed disappointment Irish Rail had not agreed to suspend work near Limerick Junction, and between Cahir and Clonmel.

A request to Irish Rail calling for “a moratorium on further destruction pending an expert review and meeting with Irish Rail officials” was sent on January 15th and the company responded last week. Irish Rail has agreed to meet the group on February 12th.

“There is mounting frustration and anger about the methods being employed by contractors working for Irish Rail. Instead of the traditional method of hedge cutting along the railway embankment, long sections of ancient native hedgerow have been destroyed without any obvious purpose,” Mr O’Meara added.

Irish Rail spokesman Barry Kenny said the work was in line with legislative requirements to erect new fencing, and confirmed replanting of native species would take place, which would over time enrich biodiversity. Under rail safety legislation there was no need for an environmental impact assessment.

There was 4.4km of fencing renewal on the line, by agreement with adjoining landowners and outside of nesting season, during 2019. Hedgerow was removed where it had compromised existing fencing “or where existing areas are incompatible with the current fencing standards set out in our safety systems”.

At the meeting with SOH, Irish Rail would outline its vegetation management processes “to detail how we will undertake replanting, as well as the key safety considerations we must take into account when maintaining the railway boundary”, he said.

Replacement of a 150-year-old hedgerow with a new planted hedge “takes no account of the massive loss to our environment of such a rich and established source of wildlife...We believe they wish to push on with the work with all speed ahead of the end of February nesting season cut-off,” Mr Moore said.

Ireland has the lowest tree cover in Europe; and much of it is hedgerows, he said. “Unfortunately Irish Rail is not the only culprit in hedge and tree destruction. We’ve seen in recent months ongoing ripping out of hedgerows on farms around the county, which appears to be associated with a new industrial style of farming,” he said.