Election 2020 fact check: How is the clampdown on AirBnB-style lettings working?

Is Fianna Fáil correct to claim Fine Gael is failing to provide resources to enforce laws? 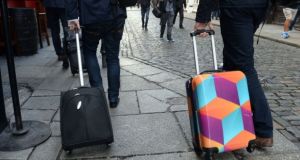 The Minister for Housing published new rules on short-term lettings at the end of 2018, which came into force last July. Photograph: Cyril Byrne

Have resources been made available to enforce new laws on AirBnB-style lettings?

In its election manifesto, Fianna Fáil claimed that Fine Gael “has not backed up its press release politics with actual resources for Local Authorities to enforce new regulations.

“We will back up local authorities with specific staff for enforcing new rules. In addition, a standardised approach to enforcement will be rolled out nationally and unit ownership identification strengthened”.

The party also promised to allocate €10 million to fund some 200 staff to “tackle the problem across Ireland”.

Upon what is Fianna Fáil basing its claim?

Asked for evidence to substantiate its claim, Fianna Fáil pointed to two sources.

The first is a reply to a parliamentary question put down by Darragh O’Brien, the party’s housing spokesman, to Minister for Housing Eoghan Murphy. Mr Murphy responded to the question by saying that his department planned to allow local authorities to hire new staff from funding to be provided in 2020, and that the Department would try to recoup the cost of additional staff hired in 2019.

The full response is available here.

Fianna Fáil also referred to a Freedom of Information request. It didn’t share the full FoI response, but did send a press release based on it from November last year. The press release claimed no additional staff were in place in 17 of 18 local authorities which contain rent pressure zones.

The disruptive effect of short-term lettings (STL), led by websites such as AirBnB, on the housing market has been a contentious political topic for several years. Strong incomes from such lettings have led many property owners to place houses and apartments on such platforms, rather than being made available for long-term rent. Critics say this has exacerbated the housing crisis and made the shortage of rental properties more acute.

To counter this, the Minister for Housing published new rules on short term lettings at the end of 2018, which came into force last July. Under the new rules, owners of properties in rent pressure zones have to get planning permission to use them for more than three months a year.

Fianna Fáil’s claim is that no “actual resources” have been made available to monitor enforcement. The Irish Times contacted the Department of Housing as well as local authorities in Irish cities (where most RPZs are) to ask what resources had been made available.

In the capital, Fingal County Council has received approval for €518,800 for 2020 and 2021 to assist with short term letting provisions in the county; Dublin City Council has filled nine of 12 positions that have been approved by the Department of Housing for enforcement and monitoring; South Dublin County Council confirmed that it requested and received resources for management of short-term letting, but did not elaborate; Dún Laoghaire-Rathdown received funding of €185,170 for 2020 and 2021 and is putting resources in place to regulate STLs.

The Department of Housing confirmed it had received €2.5 million to fund enforcement of the new rules, and said all local authorities where RPZs are located (excepting Sligo, where RPZ designation only occurred in December) have received their funding allocations. In total, it said local authorities have estimated that over 60 additional staff will be required.

Fianna Fáil’s core claim was that “Fine Gael has not [made available] actual resources for local authorities to enforce new regulations”.

While it might be a legitimate argument that the resources are not sufficient, or that better practice should be developed for enforcement, as the party does, it is clearly not correct to say no “actual resource” has been made available for enforcement.

Therefore we find that the Fianna Fáil claim is untrue.