More than 250 cyclists took to the banks of the river Liffey on Sunday morning calling for the implementation of the proposed cycle plan along one of the busiest stretches of road in Dublin’s city centre. Footage: Sorcha Pollak 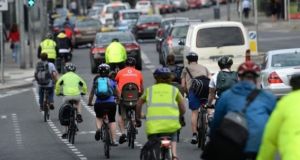 Since a new reporting system was introduced six years ago, the number of cyclists seriously injured has risen from 104 in 2014 to 170 in both 2017 and 2018, the report found. Photograph: Dara Mac Dónaill

Ireland recorded the highest annual increase in deaths of cyclists among all EU member states over a nine-year period, a new report has found.

The study by a leading EU transport safety body said deaths of cyclists rose by an average of 8 per cent annually between 2010 and 2018. This was almost four times the rate of the next worst countries, the Netherlands and France, where rates rose by 2 per cent.

The average percentage is calculated from a relatively low base of five deaths in 2010 and takes account of a recent fall in the number of cyclists’ deaths - from 14 in 2017 to nine in 2018. A total of 83 cyclists were killed in the years 2010 to 2018 inclusive.

Eight cyclists were killed on Irish roads last year but the 2019 data falls outside the scope of the study.

The average increase in cyclist deaths in Ireland in 2010-2018 compares to a 5 per cent annual decrease in the deaths of motor vehicle drivers and passengers on Irish roads over the same period.

The report by the European Transport Safety Council, whose members include Ireland’s Road Safety Authority, has called for urgent action to tackle the deaths of cyclists and pedestrians on European roads.

Since a new reporting system was introduced six years ago, the number of cyclists seriously injured in Ireland rose from 104 in 2014 to 170 in both 2017 and 2018, the report also found.

It said sustainable modes of transport such as walking and cycling must be made safer not only to cut deaths and injuries but also to help the environment. It recommended better urban planning, 30km/h speed limits and other traffic calming measures.