Election 2020: Where do the political parties stand on cycling? 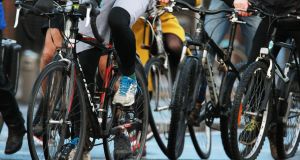 Ahead of the general election, are the parties mentioning the merits of cycling in their manifestos? And what exactly are they promising? File photograph: Nick Bradshaw/The Irish Times.

Cycling is being embraced by most political parties as a means to lessen the problems of urban congestion and transport-based carbon emissions.

It’s also a way of improving people’s health, an increasingly popular pursuit and a relatively inexpensive thing to make promises on.

The numbers saddling up to get to work increased by 43 per cent between the 2011 and 2016 censuses from 39,803 to 56,837. However, this represents just 3 per cent of all commuter journeys, is less than half the proportion recorded in 1986 (6.8 per cent) and is well short of a 10 per cent target set under the Irish National Cycle Policy Framework published in 2009.

Poor infrastructure, low funding and a perception that it is a dangerous way to travel are seen as major impediments to raising the numbers further.

Ahead of the general election, what exactly are the parties promising to do to change this? And what do cycling advocates make of their pledges?

The party has said it will invest €50 million in a national cycling strategy, which will be used to expand cycling infrastructure.

It has promised to give cyclists priority at lights and to improve access to the bike to work scheme by reducing time limits for availing of the scheme between purchases from the current five years .

As mentioned on #cblive, we need cycling as part of climate action. But YOU need to tell candidates you want the investment -- tell them to sign up to https://t.co/PPy7LhLtbW.

This is one entrance to just one bicycle parking unit in Utrecht: https://t.co/wQaoBoQNUy

At last, we’ve got all the party #GE2020 manifestos.
<cracks knuckles>

We’re judging promises against our 10 Asks to Make Cycling Better and Safer for All.

Fine Gael says the configuration of streets in urban areas is a major impediment to the building of cycling infrastructure. The party promises that, if returned to office, it will develop cycle network plans for Dublin, Cork, Galway, Limerick and Waterford.

It says it would publish a five-year plan to more than double the numbers cycling to work on a daily basis from the current 57,000 to at least 120,000. An initial €6 million a year from the proceeds of the carbon tax would be made available to fund improved cycling infrastructure and initiatives based on local need. As part of this, Fine Gael would ensure that all children in primary school are offered cycling training.

The Sinn Féin manifesto is light on detail when it comes to cycling. It promises to improve cycling infrastructure (all the parties do) and implement the Greater Dublin Area Cycle Network Plan and the Athlone to Galway Euro Velo network.

The party pledges to dedicate 10 per cent of the national transport budget to the development of cycling infrastructure, to expand the public bike schemes to large towns and to give local authorities funds for maintaining bikes. It says it would prioritise the creation of a network of off-road “cycling highways”, incentivise the purchase of bicycles by school children and regulate the use of electric-scooters to “ensure safe usage for all road users”.

The Green Party puts huge emphasis on cycling in its manifesto. The main promise is to assign 10 per cent of the capital transport budget (€167 million a year at present) to cycling, and to make every local authority draw-up a cycling policy. It wants to introduce a programme of bicycle maintenance and safe cycling education in schools to improve behaviour and safety on the State’s roads. The manifesto says cyclists should be allowed to make a left turn when traffic lights are red, people to be allowed bring bicycles on all trains and that electric bicycles should be incentivised.

The Social Democrats also put a heavy emphasis on cycling in its manifesto. The party commits to cycleways and greenways such as from Baldoyle to Portmarnock in Dublin, a Naas Greenway and other projects including the Galway Cycle Bus and the Liffey Cycle Path. It also wants 10 per cent of the capital transport budget to be allocated to cycling initiatives.

People Before Profit proposes a one-off investment of €165 million to create major cycling lanes across the country. There are no details in the manifesto as to how this money would be spent.

The Irish Cycling Advocacy Network is calling for political parties to allocate 10 per cent of the transport capital budget to cycling, and a further 10 per cent for walking, to put Ireland in line with a UN environmental target. This would amount to about €147 million this year.

“We can’t build safer infrastructure without it, ” said the network’s spokeswoman Martina Callanan.

“The Greens and Social Democrats have promised this. Labour is on the senior hurling pitch too. It offers 10 per cent for cycling and walking in the next government, and will increase to 20 per cent,” she says.

“Fianna Fáil is really disappointing - only an extra €50 million for ‘urban cycling’. They seem to have cast aside their 2018 cycling policy, Keeping Cyclists Safe.

“Fine Gael’s manifesto continues with their programme for government. They’ve offered a very attractive sounding ring-fenced 10 per cent of carbon tax to cycling and walking and a headline figure of €600 million - but looking at the finer detail reveals that’s only €60 million per year, far short of even half of what we want.”

Callanan says Solidarity-People Before Profit’s promises are limited beyond the once-off €165 million pledge for infrastructure and that Sinn Féin does not give a funding commitment.