Election 2020 in Co Mayo: ‘Many people are disillusioned with Fine Gael’

Harry McGee joins Saoirse McHugh, the Green Party's candidate for Mayo in the 2020 general election, on the campaign trail in Castlebar and Foxford. Video: Bryan O'Brien 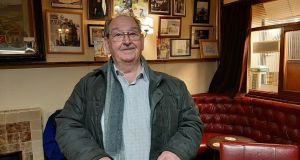 In the small town of Foxford, Co Mayo, the regulars sitting around the Guinness tap in Guiry’s Bar have all heard the joke before, but it doesn’t stop Pat Mahon (83) from telling it again.

It is a long, rambling tale about a dead politician who is tricked into choosing a seemingly splendid hell over a less-impressive heaven. The punchline? The devil is a master campaigner, and hell turns out to be nothing more than a barren landscape made of empty promises. The drinkers muster a chuckle.

They have voted in their fair share of general elections, and some have come to view the electoral cycle as something of a swizz. Regardless, as rural pensioners they are among the cohort most likely to turn up to vote come February 8.

Joking aside, Mahon is tired of listening to the “same old, same old” auction politics, where glossy pledges never seem to translate into action after ballots have been cast.

“Two weeks ago we didn’t have two pennies to rub together. Now all of a sudden we have so much money to throw away at everything,” he says, adding: “Do you believe them? I certainly don’t.”

We can deal with the green issue later but we need more industry here now. We are all green out here in the west

Originally from Carlow, Mahon has lived in Foxford for nearly two decades but hasn’t seen positive change of any significance in the area. Instead, he has witnessed the demise of roads, rural depopulation, and the death of many local businesses and pubs. The men count aloud the number of pubs that have shut in the village. They decide it must be at least five within the last 15 years – a “desperate decline”, says Mahon.

Mahon’s buzzword for the evening is “connectivity”, which he believes encompasses the need for both a social and infrastructural “push for the west”.

“The roads haven’t been improved in years,” he says. “We are at a crossroads here in Foxford, so every single pound of butter has to go across that bridge.”

Running through the village, the winding N26 has kept itself in local headlines, with frequent collisions, sometimes multiple per week.

An undecided voter, Mahon is looking for someone who will bring a bit of “parish pump politics” to the area. He would like to see more industry come to Mayo, instead of squeezing into the already “choked” eastern side of the country.

Pat Ruane, who worked in accounting in Dublin before retiring to Foxford, believes many people are disillusioned with Fine Gael. Having voted for all shades of party in the past, he will be voting Green this February, as the environment is “one of our biggest problems down here, along with roads.”

As the other drinkers know well, Ruane is related to a Green candidate, but he assures his concern for the planet is inspired by more than just family.

Pat Mahon will put as his second preference the Green candidate for Mayo, Saoirse McHugh, he says with a wink that works to undermine this statement.

He elaborates: “We can deal with the green issue later but we need more industry here now. We are all green out here in the west.”

Ruane interjects: “It is not just about grass, Pat.”

Ruane would like to see “more imaginative thinking” around diversification of farming and energy production, and for the pollution of lakes and rivers to cease.

He will be “supporting people who support the west,” as he believes the region has been neglected for many years.

“It has been an east-coast government here for as long as I can remember. I know the tourist aspect has been pushed quite well recently, but we still need better [transport] access and more incentives to bring people to the west,” he says.

“It is not rocket science to change it around a bit and make a more even spread of industry around the country.”

Michael Ring, Minister for Rural and Community Development, is the only TD who has placed an emphasis on the county, he adds.

With former taoiseach Enda Kenny off the ballot, Michael Ring is expected to top the poll in the four-seat constituency. Fianna Fáil deputy leader Dara Calleary and the party’s Brexit spokesperson, Lisa Chambers, are hoping to return to the Dáil, while Senator Michelle Mulherin and former Mayo footballer Alan Dillon are competing fiercely for a potential second Fine Gael seat.

Although he suspects the election will result in another coalition, Paul Maguire (70) hopes to see a “strong government” filled with politicians who “won’t jump to Europe”. He explains he is referencing the likes of Fine Gael’s Dara Murphy and MEP Mick Wallace, who both left the Dáil for jobs in Brussels.

Although he won’t be in the country for the vote, he would still like to read the party manifestos to see which has the most credible five-year plan for a stable country.

“For me it is nothing to do with liking this party or that party, it is mostly about the economics,” he says. He is impressed with Minister for Finance Paschal Donohoe’s handling of the economy.

Micheál Martin for Taoiseach? He shakes his head. Leo Varadkar? “Iffy.” He would prefer Simon Coveney. Having lived in Belfast during the Troubles, he is grateful Coveney “never gave up on the [Stormont] Assembly” and admires his record on Brexit.

From behind the bar, Martha Guiry says she is hoping for “stability across the board”, although which party will bring that she won’t say. Based in the centre of the village, she and her husband – the bar’s owner – are lucky their clientele live nearby, she says.

While she agrees with the drink-driving laws, they have “totally changed the face of local pubs and towns.”

“If we were further outside the town we would not survive. It is sad. Little pubs like this have to be part of any town or village.”

Her customers are predominantly older, she says. While she doesn’t believe emigration is forced upon young people these days, there is not enough infrastructure in the west of Ireland to encourage them to stay, she says.

“Anyone leaving is well-educated. Some of our very bright stars, like doctors, are emigrating. Wouldn’t it be lovely if we had a situation where we could entice them back?”