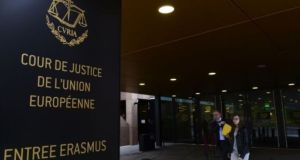 Ireland has been referred to the European Court of Justice over its persistent failure to designate special areas of conservation. File photograph: AFP/Getty Images

Ireland has been referred to the European Court of Justice over its persistent failure to designate special areas of conservation (SACs), more than five years after the deadline expired.

Under the Habitats Directive, EU member states must designate such areas with specific conservation objectives and corresponding measures to maintain or restore a favourable status for the species and habitats present.

These steps need to be carried out within six years from the inclusion of these areas in the EU list as sites of community importance (SCIs).

In Ireland, 154 sites (out of 423) have not yet been designated as SACs in the “Atlantic biogeographical” region, though the deadline expired in December 2014. Environmental groups have claimed this is contributing to biodiversity loss and decline of internationally important species.

Site-specific conservation objectives have not been established for 87 sites, and the necessary conservation measures have not been established at any of the 423 sites, the European Commission confirmed. “As the Irish authorities did not sufficiently address these concerns following a reasoned opinion, the Commission has decided to refer Ireland to the Court of Justice of the EU.”

This ruling is not at all surprising to anyone who has been following the issue and all too aware of the scale of habitat destruction and species loss in Ireland, said Irish Wildlife Trust campaigns office Pádraig Fogarty.

“It really underlines why we need a strong nature conservation agency with a minister who can speak up for it at Cabinet,” he added. “I’m actually in the 12 Bens Mountains at the moment, which is a special area of conservation. I’ve counted two birds since I got here at 10am this morning – two,” he said.

“The heath and bog habitats are all but destroyed from sheep grazing and conifer plantations and despite the designation there are no initiatives that I’m aware of that’s doing anything about it,” Mr Fogarty pointed out.

Meanwhile the European Commission is asking Ireland to respect its obligations under EU rules on environmental impact assessment (EIA) regarding projects “likely to have a significant negative impact on the environment”. This includes peat extraction projects.

Ireland has had numerous problems with transposition and application of the EIA Directive for this category of projects, it noted. The court previously found it had failed to correctly transpose the original directive with regard to peat extraction activities.

While legislation was amended and the case closed, the European Commission subsequently received complaints it was still not being applied to peat extraction activities.

Given the significant peat extraction has continued in Ireland since the EIA Directive was required to have been transposed and applied in 1988, the Commission has raised these concerns in a letter of formal notice.

As Ireland failed to answer these claims, the Commission “is now issuing a reasoned opinion. Ireland has three months to bring itself into compliance”, otherwise the Commission may decide to refer the matter to the Court of Justice of the EU.

The legal move, which means Ireland has three months to bring itself into compliance, was welcomed by Friends of the Irish Environment (FIE) who had lodged renewed complaints with the Commission last year “over continuing unauthorised extraction by both private contractors and Bord na Mona”.

“Taxpayers paid a €5 million fine in February 2020 and continue to pay €15,000 a day for a case arising from the Derrybrien landslide in Galway that was determined in 2008. That additional bill stands at €3 million as of today and rises every day. It is cheaper to obey the law,” he added.