‘Do not swim’ notices lifted from three Dublin beaches

Warnings had been put in place at Dollymount, Sandymount and Portmarnock 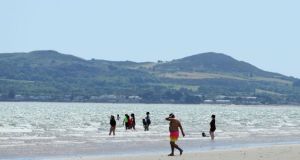 The precautionary “do not swim” notices had been put in place at Dollymount, Sandymount and Portmarnock beaches, following heavy rainfall last week.

The incidents arose due to storm water tank overflows at Ringsend wastewater treatment plant resulting in discharges into Dublin bay. The temporary ban was implemented by local authorities in consultation with the Health Service Executive.

The Ringsend plant treats approximately 40 per cent of Ireland’s public wastewater but has been operating over capacity for many years, and comes under acute pressure during periods of unusually heavy rainfall.

On Sunday Fingal County Council announced it was lifting the swimming ban on Portmarnock beach.

The temporary notice had been put in place last Wednesday “due to possible effect on water quality due to the storm water overflow at the pumping station, likely to be as a result of the heavy rain event locally,” a spokeswoman said.

Lab results of water quality from testing on Thursday came back “excellent,” the council spokeswoman said.

On Monday Dublin City Council announced it would be lifting the “do not swim” notices placed at Dollymount and Sandymount, after results from lab testing came back clear.