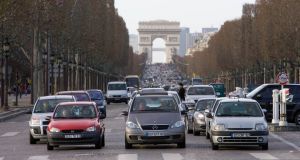 How traffic usually looks on the Champs-Élysées: At one point during the lockdown Paris’s nitrogen dioxide levels were 61 per cent below pre-pandemic levels. Photograph: Tim Graham/Getty Images

Air pollution levels have rebounded sharply in a number of leading European cities since coronavirus restrictions eased, driven by an increase in traffic and congestion.

Paris, Brussels and Milan have all experienced significant rises in nitrogen dioxide compared with their lows during the lockdown, according to an analysis based on data from the European Environment Agency (EEA).

The data underscores how the environmental benefits of lockdown may have been short-lived, as more commuters shun public transport due to the virus and use their cars instead.

“It is definitely a huge challenge that we are seeing pollution volumes at or near pre-Covid-19 levels, even though in many cities traffic volumes are below pre-crisis levels,” said Lauri Myllyvirta, analyst at the Centre for Research on Energy and Clean Air, which produced the analysis alongside the Financial Times.

“We risk getting pre-crisis levels of congestion and pollution already, before full economic reopening,” he added.

Analysis of the EEA data show that nitrogen dioxide pollution in Paris has risen from 13.6 micrograms per cubic metre at its lowest point during the lockdown, to 29.7 µg/m3 most recently, based on a weather-adjusted 30-day average.

The air pollution levels in most European cities are still below that of a year ago, according to the analysis. But a rapid uptick in many over so short a time period has stoked concern among clean-air advocates.

William Todts, head of the Transport and Environment campaign group, welcomed the fact that the pandemic had accelerated many cities’ plans to encourage cycling and walking.

“A big test will be whether they make all those temporary measures permanent,” he said, adding that there was a “short-term risk” of more cars on the road due to fears of using public transport.

Traffic congestion has risen markedly in Germany, France and Italy compared with during the lockdown, according to data from TomTom, the satellite navigation device company.

Meanwhile the number of people using public transport has plummeted. The London Underground is carrying about 12 per cent of its normal passenger load.

Anne Hidalgo, the mayor who faces a re-election battle this weekend, has made clean air a key part of her agenda, and has long been an adversary of cars in the capital. She has used Covid-19 as a way to advance her agenda for a greener, less polluted city with more pedestrians and cyclists.

“Fighting against all types of pollution is a public health issue,” she told Le Monde newspaper recently. “That is why we will continue to reduce the presence of cars in our city.” Her proposal to lower the speed limit on most city streets from 50km/h to 30km/h is likely to infuriate drivers who have already been irked by her anti-car policies.

The air pollution data show that cities which did not go through a hard lockdown – such as Malmo in Sweden – recorded higher levels of vehicle pollution this year compared with last year.

Athens, Bucharest, and Munich have also experienced significant rebounds in air pollution. Among the major European cities that did lock down, Budapest is the only one that has already rebounded above normal levels, according to the analysis. – Copyright The Financial Times Limited 2020